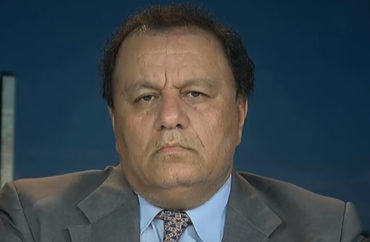 A former Boston University professor has been arrested and charged with “acting and conspiring to act as an unregistered agent of the Government of the Islamic Republic of Iran,” according to the U.S. Department of Justice.

“For over a decade, Kaveh Afrasiabi pitched himself to Congress, journalists, and the American public as a neutral and objective expert on Iran,” said John Demers, Assistant Attorney General for National Security, in a statement following the arrest.

“However, all the while, Afrasiabi was actually a secret employee of the Government of Iran and the Permanent Mission of the Islamic Republic of Iran to the United Nations (IMUN) who was being paid to spread their propaganda,” Demers said, adding, “In doing so, he intentionally avoided registering with the Department of Justice as the Foreign Agents Registration Act required.”

“We now begin to hold him responsible for those deeds,” said Demers.

According to the DOJ, Afrasiabi emailed Iran’s Foreign Minister and Permanent Representative to the United Nations last year with advice for “retaliation” for the U.S. military airstrike that killed Iranian Major General Qasem Soleimani.

In his email, Afrasiabi suggested Iran “end all inspections and end all information on Iran’s nuclear activities pending a [United Nations Security Council] condemnation of [the United States’] illegal crime.”

He claimed that such a move would “strike fear in the heart of [the] enemy.”

According to the complaint, Afrasiabi is a citizen of the Islamic Republic of Iran and a lawful permanent resident of the United States. For years, he has portrayed himself as an expert on U.S.-Iran relations on American television shows, while publishing books and academic articles. He holds a Ph.D. in political science from Boston University, having completed a thesis titled “State and Populism in Iran” under the supervision of famed historian Howard Zinn.

Since his graduation, Afrasiabi has been featured in the Washington Post, the Boston Globe, and numerous other prestigious publications. According to his website, he has also been featured as a Middle-East expert on CNN, Aljazeera, Voice of America, PBS, the BBC, and others.

Yet despite knowing he was legally required to report his dealings with the Iranian government, Afrasiabi never registered as an agent of the Government of Iran.

“Mr. Afrasiabi never disclosed to a congressman, journalists or others who hold roles of influence in our country that he was being paid by the Iranian government to paint an untruthfully positive picture of the nation,” said FBI Assistant Director in Charge William Sweeney. “Our laws are designed to create transparency in foreign relations, and they are not arbitrary or malleable. As today’s action demonstrates, we will fully enforce them to protect our national security.”

Afrasiabi is o stranger to a courtroom. In 2010, he accused Cambridge, Mass. police of “racist, brutal, unprofessional and malicious” behavior when they arrested him after he left a restaurant without paying for his meal. In 2017, he sued the Commonwealth of Massachusetts for false imprisonment after he was arrested for harassing a coffee shop owner that refused to hold an event featuring famous Massachusetts Institute of Technology Professor Noam Chomsky.

Afrasiabi is set to make his initial appearance before before Federal Judge Jennifer Boal on January 19. If convicted of both charged offenses, Afrasiabi faces a maximum sentence of 10 years in prison.