Share your story, which currently has over 3,600 followers, accepts submissions via direct message and posts them. Some posts contain the name of the alleged assailant, while others contain only an account of the purported rape, sexual assault or sexual harassment.

The account does not release the identity of anyone making an allegation nor seek to verify any claims. There are currently nearly 100 stories on the account’s homepage.

The account’s creators argue that sexual assault on campus is a “fraternity problem” and a “sports problem” and has compiled accusations against several fraternities as well as the men’s basketball team at the University of Vermont. 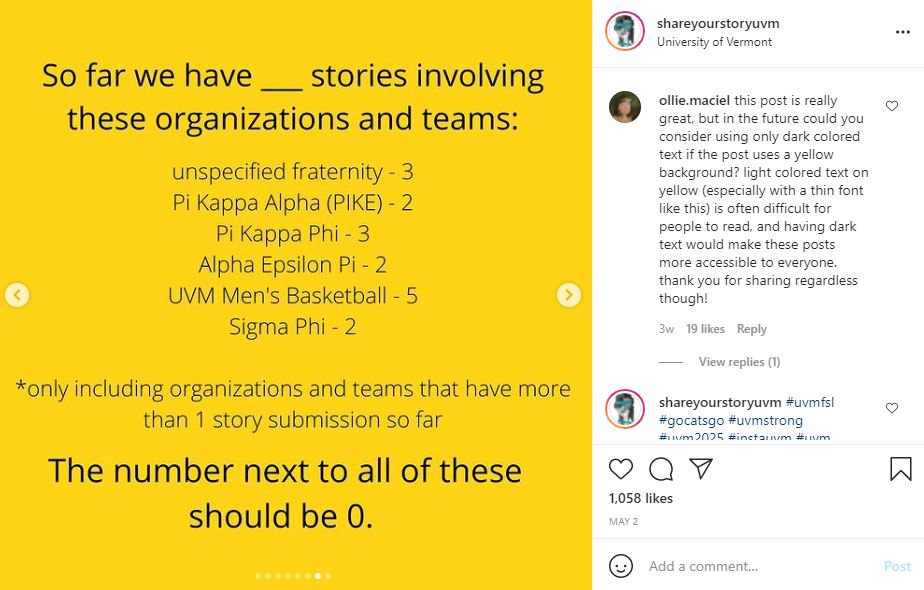 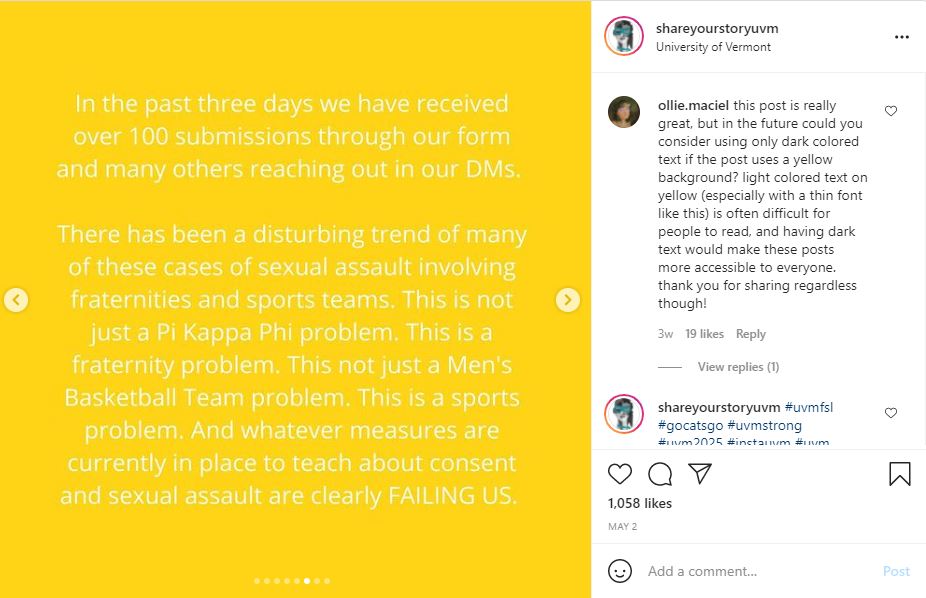 But one group of students that has come under particular scrutiny is the Pi Kappa Phi fraternity for the use of a survey that aimed to gauge members’ attitudes toward rape and sexual assault and affirmative consent, among similar topics.

The terminology and types of questions used in the survey perpetuated “rape culture on campus,” the Share your story account’s administrators stated in a post, naming the questionnaire the “Brotherhood Survey.”

The account claims it’s fielded three assault allegations against Pi Kappa Phi members as perpetrators. Two of them have been publicized and attributed to a member of the fraternity, one of whom is given a first name, identified as “Ross from Pi Kappa Phi.” The way the accusation is written it suggests the allegations involved sexual harassment and took place in the past.

The hyperfocus on the frat began after a user claiming to be a member of the fraternity submitted a section of the survey, which was provided to the fraternity by the consulting firm Dyad Strategies.

“[T]here is no way I can articulate just how twisted and fucked up the language gets during the survey,” wrote the alleged fraternity member.

Fraternity members taking the survey are presented with statements accompanied by a scale with five answer options. Those surveyed may indicate that they strongly disagree, disagree, are neutral on, agree, or strongly agree with the preceding statement, according to a clarification released by the fraternity.

But many were upset by the wording of some of the statements from the survey.

“Sexual assault is not that big of a deal on campus,” reads one prompt.

“If a female goes upstairs to a guy’s bedroom at a party, it is her own fault if something bad happens to her,” asks another.

Many students in the comments of @shareyourstoryuvm’s post took issue with the use of the word “female” as a noun, which happens in six of the questions the account publicized.

The College Fix reached out to the account’s administrators through Instagram direct message, asking what specifically was objectionable about the survey, but they did not respond to repeated requests for comment.

A day after the April 30 post, the Pi Kappa Phi chapter at UVM put out a statement adding context to the survey.

“Our chapter understands the concern around the Dyad Strategies survey,” the statement reads. “We stand against sexual assault and support all survivors.”

“The statements do not reflect our chapter’s beliefs around sexual violence and give our brothers the opportunity to express their disagreement around harmful attitudes.”

On May 1, several vehicles were damaged at the Pi Kappa Phi house, the student newspaper reported.

The vandalism took place after “@shareyourstoryuvm leaked an anonymous submission of Pi Kapp’s ‘brotherhood survey,’ which contained language that many viewed as misogynistic and perpetuatory of rape culture,” reported the Vermont Cynic.

The article reports there has been a spike in vandalism against more frat houses as well.

The College Fix reached out to Franklin Cody, president of the UVM chapter of Pi Kappa Phi.

Cody declined to comment and instead referred The College Fix to Monica Ceja, the assistant executive director of communications for the national Pi Kappa Phi fraternity. Ceja echoed the views expressed by the UVM chapter.

“The Dyad Strategies assessment is a professional tool used to measure different aspects of organizational culture,” she wrote in an email to The Fix.

“The Dyad Strategies survey,” Ceja went on, “is used nationally by nearly 100 universities and organizations. The same methodology is widely used by researchers studying attitudes around victim blaming.”

The College Fix reached out to UVM Chief Communications Officer Nicci Brown, but she did not respond to repeated requests for comment.

This is not the first time activists have taken to social media to publicize unconfirmed sexual assault allegations.

In the summer of 2020, anonymous accounts similarly solicited accusations of rape at universities such as Michigan, Michigan State, and Rutgers. The admins would then post the stories along with a name and picture of the accused.

Those accounts have since become inactive.