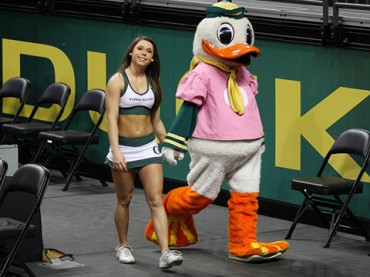 A resolution condemning Greek life and calling for a halt to its expansion at the University of Oregon faces fierce opposition from Greek leaders.

The student senate’s resolution comes on the heels of a professor’s “campus climate survey” that purports to show high rates of sexual assault in Greek life, though the school implied the survey wasn’t “responsibly designed,” as The College Fix reported.

An amended version of the resolution passed the senate Feb. 18, calling on the school to halt the system’s expansion starting next spring, when the next climate survey comes out, if sexual-assault rates in Greek life didn’t decline.

At the previous week’s meeting, Greek members packed the hearing room and prompted “heated discussion” for three hours before senators voted to table the resolution, the Daily Emerald reported.

The amended resolution says expanding the Greek system now could show “deliberate indifference to known acts of harassment in its programs or activities” against “people who identify as women,” citing the disputed climate survey by Professor Jennifer Freyd.

It calls on the school to “suspend the expansion” of the system unless the next survey shows Greek life “no longer contributes disproportionately” to sexual assaults on campus.

Cosponsor Andrew Lubash, himself a fraternity member, told The College Fix by email there are “numerous issues surrounding sexual assault on our campus,” including “unsatisfactory education efforts surrounding the definition of consent.”

Lubash said Greek life is “a culture that encourages binge drinking,” and “alcohol consumption is correlated with sexual assault,” so “it’s not really surprising” Greek life has higher rates of sexual assault. Scott Coltrane, interim president of the university, included UO’s ongoing response to sexual assault in his Feb. 11 address to the University Senate.

According to the Daily’s live blog of the Feb. 11 student senate meeting, Lubash made the same correlation-causation argument earlier in the day at the University Senate.

The senator asked Coltrane why the school has “not yet committed to halting the chartering of new charters – especially fraternities – on campus?”

Coltrane responded that some Greek applications have been “going on for years” and that it wasn’t necessarily correct to blame Greek life: “Correlation does not necessarily mean causation.”

During the Feb. 11 Senate session, Lubash amended the resolution to apply only to fraternities, and not sororities.

The head of risk management head for the Panhellenic Council deferred questions to Justin Shukas, Greek life director, who told The Fix in an email that his office “is not making any comments on this at this time.”

Fraternity leaders were prohibited from speaking at the Feb. 11 session until after anti-Greek life students spoke. According to the live-blog transcript, Chase Salazar, former Interfraternity Council leader, was denied the opportunity to speak.

However, a student named Marcos from the UO Organization Against Sexual Assault was allowed to rip into the Greek attendees first.

He asked why Greek members weren’t showing similar numbers at events such as Take Back the Night that fight sexual assault. “The whole debate is a little reactionary, and a little petty,” Marcos said, according to the live blog.

Fraternity and Sorority Life “is in no way trying to hide the issues that face our community,” but it wants “communication and transparency” rather than the anti-FSL resolution, Max Lehman, the new Interfraternity Council president, told the senate.

Banning official recognition of fraternities and sororities, another idea floated, would only make the problem worse, as “the university wouldn’t have any oversight on fraternities or sororities, and things could get worse,” Brennan said, according to the live blog.