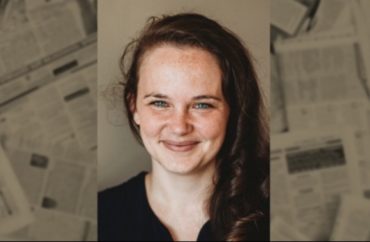 Video that supposedly backs up harassment charge actually exonerates her

In February we told you about Frostburg State University’s unconstitutional policy banning “offensive” language on flyers posted in residence halls.

The taxpayer-funded institution seems to have a recurring problem with things that happen in residence halls, at least when they get noticed outside its far western corner of Maryland.

The Foundation for Individual Rights in Education has been on FSU’s case for the past month, starting with its directive to penalize resident assistants for talking to the media about the university’s response to COVID-19.

Next the university went after a student journalist personally – including pressuring The Bottom Line student newspaper to investigate her – on a provably false charge that she harassed a staffer.

Cassie Conklin (above) also wrote about criticism of FSU’s handling of COVID-19 in residence halls, and her story was picked up three weeks later by The Baltimore Sun. On the first business day after the Sun coverage, according to FIRE, administrators summoned the editor-in-chief and faculty advisor for The Bottom Line.

The pretext? Video of Conklin allegedly “slipping a threatening note under the door of the staff member” who was previously targeted by student demonstrators. The student journalist had written a story about the demonstrations before the residence hall story:

The university said they had video evidence to prove the allegations (the video actually proves Conklin’s innocence), and directed the newspaper to investigate and punish Conklin.

One day later, the vice president for student affairs summoned Conklin to a meeting and said that the president’s office helped initiate the investigation “because of [Conlkin’s] role with the newspaper.” She was told she would be investigated not only as a student, but also as an employee of the newspaper because she received a $75 stipend during the semester.

The timing never made sense – why FSU would wait more than a month to investigate a student for allegedly harassing a staffer. And once the university showed Conklin the video, it was clear the charge had no factual basis: It showed her re-attaching a supportive note that had fallen off the staffer’s door and taking a photo of it.

FSU told her Nov. 30 there was no evidence she violated the code of conduct.

FIRE and the Student Press Law Center wrote to FSU last week after it gave “no indication” that the Conklin investigation had been closed, despite no punishment for the student journalist, or that President Ronald Nowaczyk had “rescinded his demand that The Bottom Line punish Conklin.”

While Nowaczyk quickly told FIRE and SPLC that there was no “ongoing investigation” of Conklin and punishment was never “considered,” FIRE said Monday that the university had “already sent its chilling message” to the student body: that it would find creative ways to threaten them for their protected speech.

First, Frostburg’s response didn’t explain why Conklin and [student newspaper] TBL were singled out. The university accused Conklin of having harassed a staffer by slipping notes under her door during a protest, something video evidence demonstrated Conklin did not do. But the video does show many other students actually slipping notes under the staffer’s door. It appears that Frostburg took no action against these students. (We’re glad the university didn’t discipline these students, but it is concerning that it singled out a prominent campus journalist for investigation.) Second, the university also insinuated that it felt compelled to share the “events” — which, again, were easily disproved by video evidence — with the student newspaper.

Regarding the threatened sanctions against RAs who speak to the media, the university told FIRE that it won’t terminate student employees “just because they speak up.” That raises the question whether “mean speech can be considered as part of the reason” for firing an RA, Rank wrote.

Its response to public scrutiny sows doubt about FSU’s tolerance for the “unbridled free expression” of students, especially when student journalists “publish anything critical of the university.”