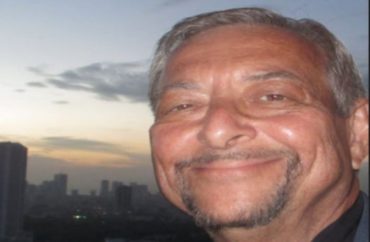 Yet another professor is no longer teaching due to using the N-word in an educational context.

George Washington University’s Professor Michael Stoil, who has taught a course on human rights over the last five years, was removed after he related to his students what he talked about on the phone with a provost, The Hatchet student newspaper reported.

Stoil (pictured) said he uttered the N-word to the provost, whom he does not name, as he discussed “differential aspects of prejudice.” This resulted in some students feeling “frustrated” and “uncomfortable” and “at least three bias reports” ended up being filed against the professor.

Stoil, who described himself as “Eurasian,” told The Hatchet the provost was “horrified” when he said the word, telling him “Oh my God, I felt that viscerally. It ran right through me.” Stoil claimed he responded by asking “You don’t listen to hip hop? You don’t listen to some of the street music? They use it all the time.”

Two of Stoil’s students told him “Yeah, but they’re Black people,” whereupon Stoil replied: “The point is I didn’t imagine that she would feel pain from the use of the N-word simply because, by the way, she didn’t know what color I was.”

Students said they felt “shocked” that a lecture on human rights had turned into a justification session for using a racial slur that, by the 1800s, had been established as a derogatory term.

“My hands were just shaking, like I just really didn’t know how to react, what to say, what to do and I just felt alone,” Keheirra Wedderburn, a junior in the class, said in an interview. “I shouldn’t have to tell you about racism because I go through it.” …

Katie Miller, a senior in the class studying political science and economics, said she was “disgusted” by Stoil’s belief that his actions were excusable, and faculty who are prejudiced should not teach at GW.

“He was saying it like we were all going to agree with him,” Miller said. “As soon as he said it, you could hear a pin drop in the classroom. Everyone was just completely shocked. Even with masks on, you could tell the look on people’s faces was pure ‘What just happened?’” …

[Sophomore Samantha] Lewis said Stoil “didn’t see a problem” with using the N-word as a non-Black individual and told her that not being able to use the N-word is a violation of his rights. She said he told her he has used the racial slur before and would have “definitely” said it in class if it was “a couple years ago.”

“No sympathy or self reflection of like ‘Oh damn, like maybe I did mess up, maybe this was a wrong comment for me to make,’” she said.

Wedderburn and Miller also expressed frustration with other past “insensitive” words and actions by GWU faculty.

“Contrary to some students’ belief, I am fully aware of the toxic reaction to use of the ‘N-word’ and other ethnic and gender-related slurs by all people,” Stoil wrote in his email to the student paper. “I object to the N-word’s use in musical performance and poetry regardless of the identity of the user and wish that students felt equally offended by its use under any and all circumstances.”

Stoil said he was told by university officials not to discuss the matter.

“The University is no place for a ‘color-blind’ humanist whose effort to get students to think in terms of universal human rights has been so misinterpreted and received so little support from University officials,” he said.