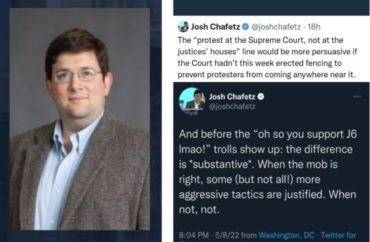 A Georgetown University law professor has expressed support for the protests targeting Supreme Court justices’ homes in the wake of a leaked draft opinion that would overturn Roe v. Wade, arguing that “aggressive” demonstrations are justified if “the mob is right.”

Georgetown Law Professor Josh Chafetz tweeted May 8 that “The ‘protest at the Supreme Court, not at the justices’ houses’ line would be more persuasive if the Court hadn’t this week erected fencing to prevent protesters from coming anywhere near it.”

“And before the ‘oh so you support J6 lmao!’ trolls show up: the difference is *substantive*. When the mob is right, some (but not all!) more aggressive tactics are justified. When not, not.” 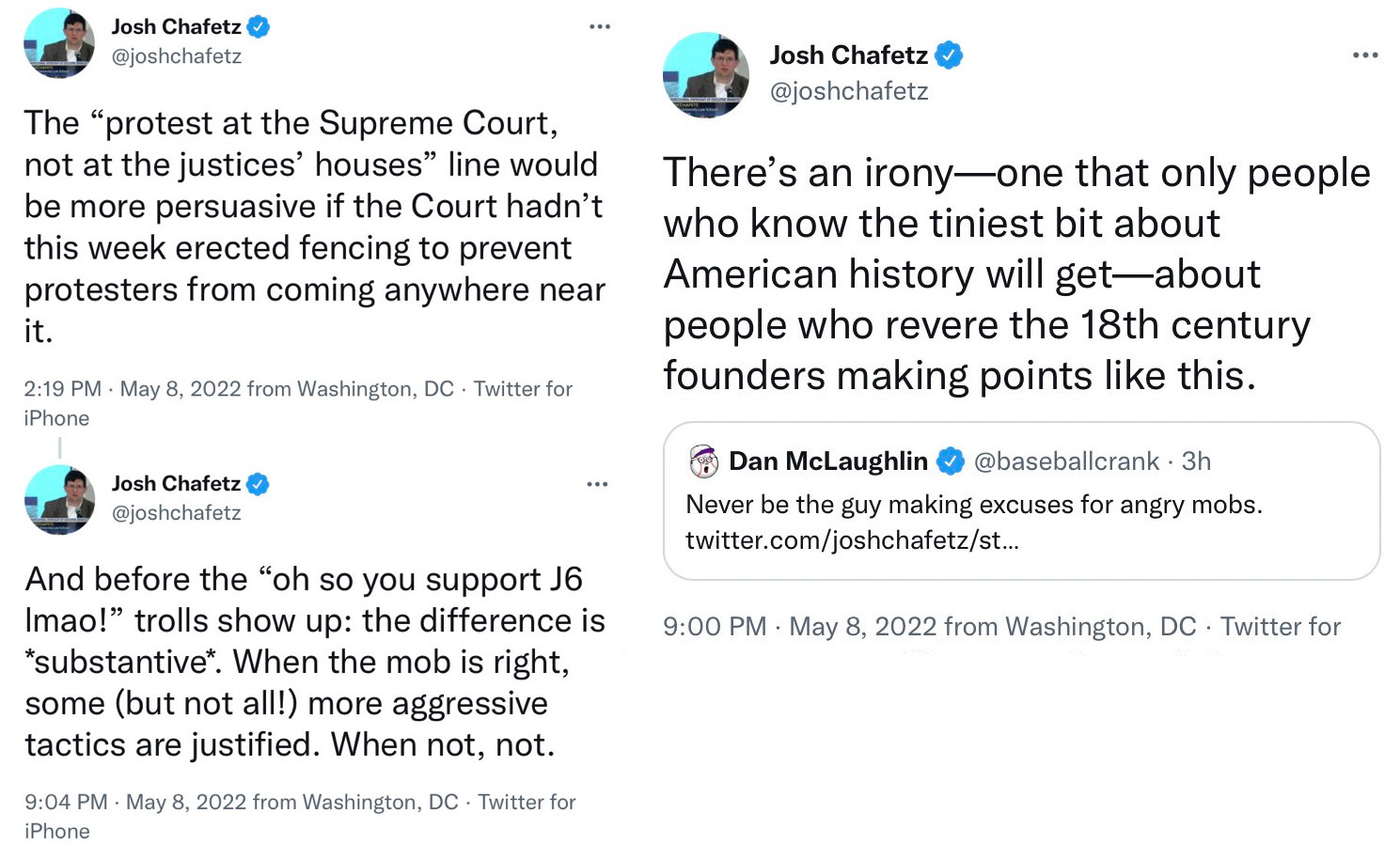 The professor’s comments have been roundly criticized by many observers, including by Ilya Shapiro, the constitutional law scholar put on administrative leave by Georgetown University in February following a tweet widely decried as racist for defending race-blind nominations to the Supreme Court.

“If only I had justified mobbing justices’ homes instead of criticizing their selection by race and gender,” stated Shapiro’s tongue-in-cheek response.

If only I had justified mobbing justices’ homes instead of criticizing their selection by race and gender… pic.twitter.com/FabzB1kqTM

A piece in National Review written by College Fix alumnus Nate Hochman called out Georgetown University for its “hypocrisy”:

Wednesday will mark the 100th day of that “investigation.” Given that the tweet in question was just 45 words — some of which were single-letter abbreviations such as “v,” “&,” etc. — that will add up to an average of 2.2 days per word. The Georgetown Law administration is very meticulous.

But the same administrators seem significantly less scrupulous when it comes to investigating controversial remarks from the progressive end of the political spectrum. Just a couple of weeks ago, a Palestinian activist with a long history of antisemitic comments — including celebrating the Second Intifada, repeatedly calling for violence against Israeli Jews, fantasizing about Israeli settlers dying “in the most torturous & slow ways,” and writing in his book that Israelis “harvest the organs of the martyred” to “feed their warriors our own” — was invited to speak on campus. But when a group of Jewish students raised concerns, Mitch Bailin, the law school’s dean of students, defended the event on free-speech grounds: “We allow a huge amount of latitude even where speech is deeply offensive to some members of the community, some or even many,” he told the students in a meeting. When pushed for specific examples, Bailin cited the fact that “the university has had speakers who have definitely said they find gay marriage, gay practice, gay individuals, completely immoral. We have had speakers who have said the same thing about trans people.”

Georgetown Law’s free-speech protections, then, extend to calls for the ethnic cleansing of Israeli Jews, but not to defenses of the principle of colorblind equality under the law.

So don’t hold your breath for an analogous “investigation” into yesterday’s tweets from Georgetown Law’s Josh Chafetz.

Another College Fix alumnus who weighed in is Graham Piro with the Foundation for Individual Rights in Education, who argued neither Chafetz nor Shapiro should face consequences for exercising free speech:

So long as the tweets do not fall into narrow categories of unprotected speech such as true threats, incitement, or defamation — and so long as they don’t constitute unprotected harassment — Georgetown’s free expression policies require that professors not be punished. …

To be clear: FIRE is by no means advocating for Chafetz to be investigated in the same manner as Shapiro. Rather, neither professor should be investigated or punished for protected extramural speech.

It doesn’t matter what political viewpoint a faculty member espouses. If the speech at issue is protected by the First Amendment (at public institutions) or institutional policies and promises (at private institutions), then that’s that: It’s protected. If Georgetown’s promises to its faculty are to mean anything, they must be upheld with consistency. We would love to commend Georgetown for upholding its promises of free expression — but with Shapiro’s position still in limbo, all we can say is that, when confronted with calls to investigate or punish Chafetz, the school has done the bare minimum by doing nothing.

But Chafetz does not appear worried he will face the same fate as Shapiro, tweeting: “Folks can snitch tag @GeorgetownLaw all they want (I’m so sorry, public affairs folks!), they’re not going to fire me over a tweet you don’t like.”