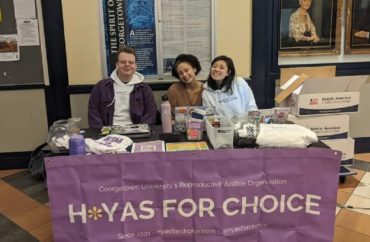 A group of abortion-supporting students at Georgetown University are upset that the school continues to host a pro-life conference named for a former leader in the Catholic Church.

“Year after year, this conference glorifies Cardinal [John] O’Connor – an infamous homophobe and misogynist,” H*yas for Choice, an unofficial student group, complained in a petition before the January 30 virtual conference. The conference is usually held the same weekend as the March for Life. O’Connor, now deceased, served as the bishop of the Archdiocese of New York for almost 20 years. The rank of cardinal allowed him to vote for the pope.

The students at the D.C Catholic university are upset that the Catholic priest opposed abortion and held the Catholic Church’s view on homosexuality. They tried, and failed, to get the conference to change its name. Supporters of the effort include the campus College Democrats and the Georgetown chapter of the American Civil Liberties Union. The editorial board of the student newspaper, The Hoya, also called on the university to stop supporting the conference.

“Perhaps his most controversial issue was his thoughts on abortion,” the pro-choice students said. “Cardinal O’Connor believed that abortion was an ‘intrinsic evil’ that could never be justified.”

It is true. Abortion is an intrinsic evil that can never be justified and Cardinal O’Connor correctly explained Catholic teaching on this issue.

But it’s not just O’Connor who found himself targeted for his views by the activists.

They criticized a survivor of an abortion for holding conservative political beliefs.

The conference had originally slated Gianna Jessen as the keynote speaker. Jessen survived a saline abortion which left her with cerebral palsy, according to her website. “Gianna was bathed in a burning saline solution, but she overcame to enter the world. Two months premature and weighing just two and a half pounds, she spent her first couple of months in a hospital,” her bio said.

She later dropped out as a keynote speaker, though it is not clear why.

The invitation of Jessen reflects “the inclusion of her hateful and harmful practices and ideologies in the conference and reflect its values,” according to the petition. It complains that she discussed voting irregularities and discussed black fatherlessness on her social media. The petition does not note that Jessen survived an attempted abortion and has cerebral palsy because of it.

The petition regularly references “cura personalis,” a phrase popular with Jesuit universities, but often misused. While the phrase means “care for the entire person,” it does not mean promotion of leftist values as the activists imply. My alma mater previously claimed that letting students make up new genders is consistent with the concept of cura personalis.

But the Catholic teaching on this issue remains clear — advocating for a mortal sin, such as abortion, is also a mortal sin, one that must be forgiven by the sacrament of Confession before one’s death and before one can receive Communion. “A mortal sin, however, kicks the Blessed Trinity out of our soul and the only way to regain Jesus’ friendship is through confession to a priest,” Dave Nix, a Catholic priest, explains.

MORE: Catholic professors silent on how bishops should address Biden’s support for abortion