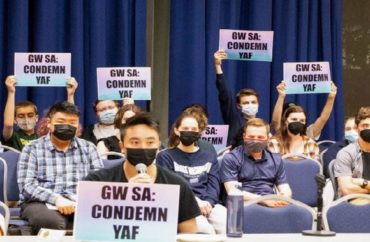 According to The Hatchet, the SAS approved the “No Place for Hate Act” on Monday which says a series of YAF tweets were “hateful,” and demands the campus Office of Diversity, Equity, and Inclusion “conduct trainings” with the conservative group to ensure it “understand[s] why [its] statements were wrong.”

The allegedly hateful/transphobic tweets in question include:

— “oh the pro-pedo libs are gonna LOVE this one”
— “we aren’t the ones advocating for the grooming and sexualization of children …”
— “The statement that pedophiles shouldn’t be teaching in schools should not be controversial, it’s common sense.”
— “AGREE OR GET CANCELLED: @benshapiro explains how trans ‘rights’ are an attack on free speech.”

Regarding the first comment, the YAF said in a now-deleted tweet that it “did not represent the entire organization’s views” and “was not meant to refer to transgender people as pedophiles, only people who support implementing education about gender and sexuality in elementary schools.”

The Hatchet notes the YAF “did not apologize” for the comment, but it did say the word “pedophile” should not have been used.

The second tweet, which The Hatchet refers to as “transphobic and homophobic,” was made in response to a member of GW Reproductive Autonomy and Gender Equity calling YAF “disgusting.”

The “No Place for Hate Act” claims YAF’s language has been used “to justify violence and discriminatory laws against the [LGBTQ] community.” It also calls upon the Office of the [GW] President to “address YAF’s statements” and explain how the university “seeks to improve safety for the LGBTQ+ Community.”

“When a club on campus calls those who disagree pedophiles or groomers, not only do they devalue a heinous, horrific evil for the sake of hurting innocents, they also signify that there could be no legal or moral quarter given to their ideological opponents,” said grad student Phoebe Shatzer, who noted she underwent “gender-affirming hormone therapy” last fall.

Freshman Kate Henjes said the YAF’s comments were “revolting” and “encourage discrimination against LGBTQ+ students.” Kai Nilsen of the LGBTQ+ fraternity Delta Lambda Phi added that the YAF should be ousted as “hate speech has no place at GW.”

The GW Office for Diversity, Equity and Community Engagement said in a statement that any student “seeking support” should contact the Multicultural Student Services Center, Counseling and Psychological Services or the Division of Student Affairs.