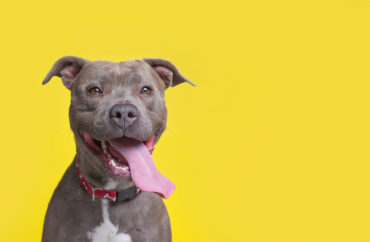 Over four thousand people have signed a petition calling for the firing of a George Washington University professor who had refused to allow a student’s pitbull service dog to enter her classroom.

According to The Hatchet, Professor Marie Matta argued with student Liza Malinsky in class late last month about the dog’s (named Charlie) presence in class.

Malinsky, who describes herself as a “disabled Black woman with a history of trauma” and “crippling anxiety,” claims on her Instagram page that Matta “humiliated” her and acted illegally by “expos[ing] confidential information about [her] accommodations and disabilities in front of all of [her] peers.”

She also posted video of the verbal scuffle.

Malinsky says GWU Disability Support Services had told her she would not need to show any paperwork to professors in order to have Charlie with her in class. 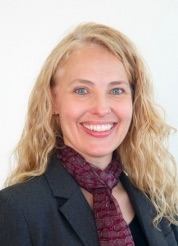 One of Malinsky cheerleading teammates, Carly Shaffer, started a Change.org petition on February 1 calling on Matta (left) to be fired for engaging in “racial and ableist injustices.”

“Liza and her service dog, Charlie were publicly shamed as a result of Liza’s identity,” the petition reads. “As the GW community, we must come together to stand with Liza Malinsky and everybody she is fighting for. Professor Marie Matta must be held accountable.”

During the pair’s argument, campus police showed up whereupon Malinsky presented the email she received from Disability Support Services stating she did not have to show any paperwork.

On February 2, Matta sent an emailed apology to Malinsky “acknowledg[ing] her actions were a mistake.”

[University spokesperson Crystal] Nosal declined to say whether officials are planning to take disciplinary action against Matta, if they had received formal complaints about the incident and what training faculty receive on how to best accommodate students with disabilities.

She declined to say whether the GWPD officer filed a report for the incident. …

“I am deeply sorry for the pain this incident caused,” Matta said in [her] email. “I am committed to learning from this experience and moving forward in the most productive way to foster a more inclusive classroom experience for you and your peers.”

In response to a Facebook comment which claimed Charlie isn’t actually a service dog and that she trained the dog herself, Malinsky said “all legal under [Americans with Disabilities Act] law.”

While it is true service animals do not have to be professionally trained, the ADA specifically notes “emotional support, therapy, comfort, or companion animals” do not qualify as service animals. There is an exception, however, for “psychiatric service animals” which serve to calm those with anxiety attacks. 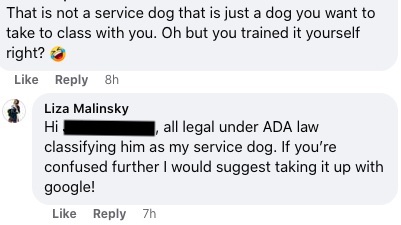 The GW College Democrats, the campus Panhellenic Association and Disabled Students Collective all posted messages in support of Malinsky on their respective Instagram pages. The latter demanded an investigation into Matta and the GW campus police.

“The Disabled Students Collective is not an organization meant to fact-check ableist experiences,” the DSC said. “We wholeheartedly support and believe the victim of the situation, as well as every other student with accommodations on our campus.”

MORE: Number of emotional support animals at Yale increased by 1400% in last year