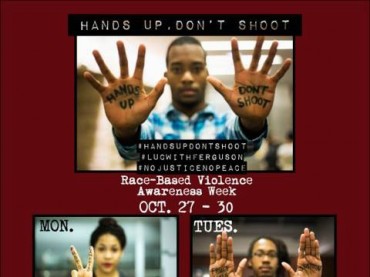 Loyola University-Chicago’s Race-Based Violence Awareness Week, which runs through Friday, is using a theme that may already be outdated: “Hands Up, Don’t Shoot.”

New forensic evidence and witness statements have called into question whether Michael Brown, a black teenager, had his hands up in surrender when he was shot by police officer Darren Wilson in Ferguson, Mo., as previous witnesses claimed.

Loyola students organized a “Hands Up, Don’t Shoot” photo in August, more than a month before any investigative results were in. Their analysis was that the teenager struggled with Wilson while the officer was still in his police vehicle. The pathologist, San Francisco’s Judy Melinek, said the autopsy “supports the fact that [Brown] is reaching for the gun” because of “particulate matter” in a thumb wound.

The Washington Post also said Thursday that its sources “familiar with the investigation” backed Wilson’s account, with the evidence casting “Brown as an aggressor who threatened the officer’s life.” Asked how the new evidence may reflect on the theme week’s suggestion that Wilson shot a black man who was not threatening him, or that the week’s activities may be interpreted as anti-police, student organizer Melinda Bunnage said in an email she was “acting out of solidarity and responding to the call to action that I hear from protesters in Ferguson.”

Bunnage said that “as a white women [sic] who is neither a member of the Ferguson community nor a police person, my voice in this conversation is not the most important” or “significant enough.”

Sponsors of the theme week declined to comment or deflected questions to the student organizers.

Steve Christensen, a university spokesperson, told The College Fix in an email that Bunnage and fellow organizer Adrianna Parker could describe “the details of the events.”

Leaders of the Justice Committee, which is promoting the theme week, declined to comment, and requests to other committee members were not returned.

Campus Ministry Director Lisa Reiter said her office’s involvement in the theme week was minimal. “Students sought out one of my staff members to assist with the prayer vigil last week,” Reiter said, but “I only learned that he was involved” during the office’s “regularly scheduled meeting.”

“I do support campus ministry sponsoring a prayer vigil that asks us to pray for the end of violence,” Reiter said.

Assistant Director Joseph Saucedo in the student diversity office, another sponsor, told the The Fix he would not comment because “our department is not hosting next week’s programming.”

The Department of Programming, Student Leadership Development and the Division of Student Development did not returned requests for comment.

Schools around the country are hosting similar events with the “Hands Up” theme despite new revelations that may complicate that narrative.

Saint Louis University’s art museum is hosting an art exhibit titled “Hands Up, Don’t Shoot,” according to The University News.

At Ohio University, student senators organized a “Hands Up, Walk Out” event on Wednesday, according to The Post.

“As being [sic] a white male, I have privileges,” Carl Edward Smith III, president of the graduate student senate, told the Post. “My whiteness and my maleness have extended a privilege to a majority. It makes me feel great to see people fight for change.”