The research director at Harvard Kennedy’s Shorenstein Center claims “right-wing agitators” are responsible for creating the perception that Black Lives Matter and Antifa demonstrators have been engaged in destructive riots.

Writing in the MIT Technology Review, Joan Donovan says rightist “media makers” who have recorded videos of “altercations” at protests in various cities have used them to “mobilize white militia and vigilante groups to take up arms” against the left-wing rioters.

Kyle Rittenhouse, the young man who shot and killed two rioters in Kenosha, Wisconsin, is an example of this phenomenon the scholar of social movements and media studies claims.

Donovan, who declares George Floyd’s death was just one in a “seemingly endless line of merciless and vicious events perpetrated by police against Black people,” says conservative media have covered in a “new way” the daily BLM/Antifa protests: “flipping the script to suggest that Black protesters—demonstrating because they fear police violence—are themselves a threat to white people.” 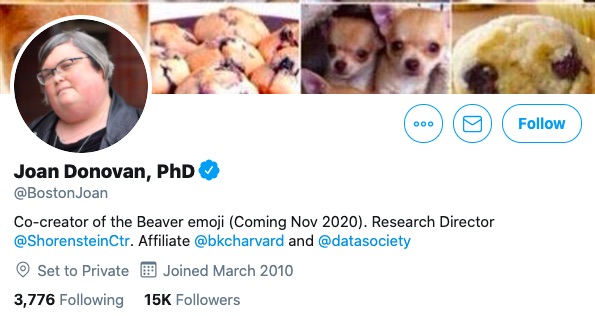 [R]ight-wing media outlets wrote five to six times more articles about Seattle’s “Capitol Hill Autonomous Zone” than did center or left media. What has been a minor storyline among left-wing audiences has been dramatically overemphasized by right-wing media because these protests provided plenty of visceral content for online content creators.

But for one complaining about editing and context, Donovan says the protesters confronted by the McCloskeys merely had “marched on their street”; in fact, that street is part of a private gated community and legal experts agree the marchers were indeed trespassing. Not to mention, the McCloskeys claim marchers threatened them.

By using riot porn to incite fear in white people, the right-wing media ecosystem converts the real pain experienced by Black Americans into fodder for deranged, paranoid fantasies that white vigilantes must take up the functions of the police. Social-media companies need to work actively to prevent militias and vigilante groups from staging these armed standoffs. This includes shutting down event pages that are used as central organizing hubs and removing the accounts of those who are calling for physical violence. What played out in Portland and Kenosha this week is another confirmation that racial terror is real and getting worse.

MORE: ‘Network of Concerned Academics’ rallies against the ‘right-wing’