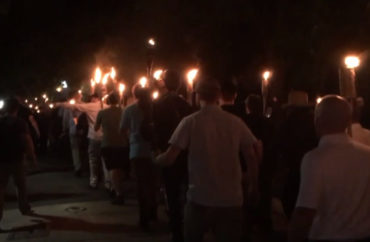 For those who have questions about Donald Trump’s appeal to the religious wing of the conservative movement: Have you considered looking at the issue through the timeless art of interpretive dance?

This weekend, attendees at the “Inaugural Conference on Right-Wing Studies” at the University of California Berkeley will be given just that opportunity.

A Friday morning session titled “Women and Gender on the Right” will feature UC Berkeley lecturer Michelle Summers to discuss a topic titled “‘Be Rough, Be Violent, Don’t Drop Her On the Floor:’ The Christian Right’s Enactment of Female Purity through Evangelical Ballet Technique.”

In an email to The College Fix, Summers says her research “investigates the embodied politics of the Christian Right via a dance studies perspective.”

The conference itself will be held April 25-27 by the UC Berkeley Center for Right-Wing Studies, a self-described “research unit dedicated to the study of right-wing movements in the 20th and 21st centuries.”

But the line-up consists of workshops, panels and screenings that frame the “right wing” as consisting nearly entirely of alt-right, white supremacist Neo-Nazi and Christian fascist types. Thus the conference will provide an analysis of the American right-wing limited by the confines of the caricature leftist academics believe conservatism to be.

The conference kicked off Thursday with a panel featuring experts discussing the far right in Latin America, Europe and the U.S. and the “threats posed by white supremacy, misogyny, anti-Semitism, and anti-democratic/authoritarian ideologies (including acts of right-wing violence over the past year and ongoing potential threats).”

On Friday night there’s a screening of the PBS documentary “Documenting Hate: Charlottesville” followed by a panel discussion “regarding the resurgence of white supremacist groups in the US and abroad.”

Some speakers at the conference are unashamed of their outright hostility toward conservatism. Panels feature academics who will discuss topics such as:

· “A Time of War: The Rhetoric and Reality of the Theocratic Far Right’s Anti-Abortion ‘Crusade’”
· “Klandidates: American Politics and the Ku Klux Klan”
· “Forging Fascism: Authoritarian Populism, Apocalyptic Aggression, and Scripted Violence”
· “Religious Right Coalition-Building Strategies: Pro-Family Politics and the Rhetoric of Victimhood”
· “From Birchers to Birthers: Understanding the Use of Figurative Language in the Narrative of The John Birch Society”
· “Exorcising The Spectre or Just Kicking a Dead Horse: The Right’s Offensive in The European Memory War”

· “My Girlfriend Became Neo-Nazi: The Right’s Presence and Activity in the Internet.”

(Undoubtedly this is an academic follow-up to the Ramones’ famous 1981 song, “The KKK Took my Baby Away.”)

One panel discussion this weekend titled “Development of the U.S. Right throughout the 20th Century” offers one scholar from “Action Against Fascism and Xenophobia” and another who will discuss “The Triumph of ‘Americanism’: How Ideas of the 1950s-60s Ultra-Conservative Anti-Communist Conspiracists Have Been Embraced and Developed In the Trump Era.” One professor on the panel will discuss “Conservatisms: Defining a Movement in National Review, 1955-1964.”

The Southern Poverty Law Center is a co-sponsor of this weekend’s conference, along with the Institute for the Study of Societal Issues, the Haas Institute for a Fair and Inclusive Society, and the UC Berkeley Departments of History, Gender and Women’s Studies, and Sociology, among others.

A trip through the Berkeley Center for Right-Wing Studies’ research history would confirm any conservative’s skepticism about whether a left-wing campus like Berkeley could offer an accurate portrayal of the political right.

The center primarily sees the “Right Wing” in terms of its most extreme elements, focusing heavily on the alt right, the John Birch Society, McCarthyites, the Tea Party, and Neo-Nazis. The center boasts a digital library of over 2,200 historical videos, overwhelmingly made up of episodes of “The 700 Club,” the “Old Time Gospel Hour,” and other television shows produced by the evangelical right.

If one were to take the Berkeley Center for Right-Wing Studies’ word for it, the Republican Party has been overrun by fascists, xenophobes, religious fanatics and misogynists. The center’s website frequently dances between the terms “conservative,” “right wing” and “hard right” as if they’re interchangeable.

Rosenthal acknowledged it might seem “strange” to study the political right given “Berkeley’s leftism,” but told the paper “personal political alignment is a secondary concern in academia.”

“We worked really, really hard over the last eight years to brand ourselves as not a political organization,” said center’s academic coordinator Christine Trost to the paper. “We do not have a political agenda. … Our mission is scholarship.”

Rosenthal did not respond to multiple requests from The College Fix seeking comment for this article.

Presumably the center’s nonpartisan spirit extends to the inclusion of Summers, who is also the author of such academic papers as “Pole Dancing for Jesus: Healthy Bodies, Healthy Souls” and “Othering the Religious Right: Ameritude, Whiteness, and the USA Freedom Kids,” in which she argues a patriotic dance team of little girls represents “the complexities of patriarchal strength, childhood futurity, whiteness as Americanness, and female empowerment integral to Trump’s success.”

The center formed in 2009 in the midst of the Tea Party movement gaining traction on the right, but its profile has intensified in the Trump Era. In 2017, the center hosted a symposium on the first 100 days of the Trump presidency which featured speakers almost entirely from the ranks of UC Berkeley staff.

Funded entirely by private donations, the center states one of its goals is to “develop and apply principles of how right-wing thought, ideology and organizational capacities operate to understand the state of the contemporary Right and identify its likely directions and successes.”

From the center’s perspective, it might simply be common sense to cast the entire right wing as a gaggle of white supremacists. In recent years, the Berkeley campus has become especially inhospitable to the right wing, most notably in February 2017 when violence broke out on campus before a scheduled speech by provocateur Milo Yiannopolous, who would return to the campus in September of that year.

In March 2017, a pro-Trump march was canceled, leading to seven injuries and 10 arrests when police clashed with protesters. In April, conservative commentator Ann Coulter canceled a speech on campus. In August, the university spent $600,000 on security for conservative Ben Shapiro to speak on campus.

More recently, a pro-Trump activist was punched in the face on the Berkeley campus, leading to criminal charges. In December, the university had to spend $70,000 to settle a lawsuit filed by conservatives alleging the school had unfairly restricted the ability of conservative speakers to appear on campus. This week, the university came under fire for anti-Semitic comments made at a student government meeting.

In light of these events, the Center for Right-Wing Studies would likely be putting itself in harm’s way if it were seen to be at all endorsing conventional conservative or right-wing thought. That is why the center has wrapped itself in left-wing endorsements, including from the embattled Southern Poverty Law Center, which is famously overzealous in deeming right-wing organizations “hate groups.” (Trost, the center’s academic coordinator, served on the academic advisory board of the SPLC’s Intelligence Project from 2014-15.)

Among the center’s “research” is scant discussion of the actual philosophical underpinnings of modern conservative thought, from Edmund Burke to Friedrich Hayek to Ludwig von Mises, on through Willmoore Kendall, Whittaker Chambers, Russell Kirk, and the other right-wing founding fathers.

Historian and author George Nash, who wrote the book “The Conservative Intellectual Movement in America Since 1945,” said in an email to The Fix that while he couldn’t comment specifically on the Berkeley center’s research, he considers conservatism “to be a complex and variegated phenomenon with intellectual substance and vitality as well as enduring political significance.”

“Like many other scholars of the subject across the spectrum, I have considered it worthwhile to examine the conservative movement through study of its most sophisticated and influential figures and not to conflate such figures with disreputable extremists and eccentrics far outside the mainstream of respectability and influence,” said Nash.

Ironically, many of the Berkeley conference’s panels will take place in the Wildavsky Conference Room at the university. Aaron Wildavsky, who died in 1993, was a famous Berkeley political science professor who was registered as a Republican.