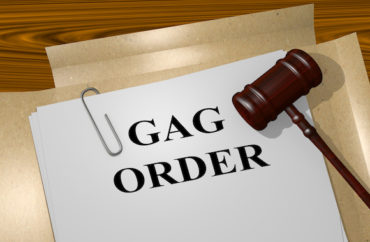 A professor is suing his university for allegedly suspending him and imposing a severe gag order on him after he called campus security on a black professor. The university’s sanctions come even after the school reportedly found the professor guilty of no misconduct toward his fellow faculty member.

Javier Tapia, an instructor at Virginia Commonwealth University’s School of the Arts, filed the lawsuit in December against the school’s president, Michael Rao, as well as Noah Simblist, chair of the department of painting and printmaking, and Shawn Brixey, the dean of the art school at VCU. According to a university spokeswoman, the suit is ongoing. In addition to seeking removal of the purported gag order, Tapia is seeking one million dollars in damages.

The controversy began last semester when Tapia called security on visiting art professor Caitlin Cherry after witnessing her eating breakfast in a room reserved for faculty and graduate students. The lawsuit states that Tapia believed Cherry may have been an undergraduate student who had gained access to the room.

Cherry subsequently filed a racial discrimination complaint against Tapia. According to the lawsuit, an internal investigation eventually found that Tapia’s request to campus security “constitute[d] a nondiscriminatory, valid reason for his decision to initiate the check in light of the policy limiting room use to faculty and graduate students.”

Tapia “did not overtly do or say anything that demonstrated that his decision to contact security was due to [Cherry’s] protected identities,” the investigation found.

Cleared of wrongdoing, but sanctioned anyway

The lawsuit says that, in spite of the internal investigation’s “definitive” conclusion that Tapia had not behaved in a racist manner, the school nevertheless placed Tapia on administrative leave. But the suit claims that the university went even further than that, slapping a significant gag order on Tapia that forbids him from any contact with members of the VCU community.

“While on leave, Tapia has been directed to have no contact of any kind with any VCU faculty, staff, or students. Contact includes in-person contact, telephone calls, text messages, emails, Facebook, Twitter, or other forms of messaging or social media contacts,” the suit states.

“While VCU does not deem Tapia’s leave disciplinary in nature, any violation of these terms could lead to formal disciplinary action, up to and including termination from employment,” it adds, stating: “The order hangs like a sword of Damocles over Tapia’s First Amendment freedoms.”

The suit says that school officials engaged in a “knowing and deliberate violation of Tapia’s clearly established constitutional rights of Freedom of Speech, Freedom of Expressive Association, and Due Process of Law.”

As the lawsuit notes, numerous members of the VCU community have publicly alleged that Tapia behaved in a racist manner. A petition circulated after the incident demanded that Tapia be disciplined for “harassing” Cherry. School administrations promised to “do everything they can for students in Tapia’s class” who might be uncomfortable having him as a professor. The student newspaper said that the controversy was an incidence of “racial profiling,” though it offered no evidence to support that claim.

As well, during the height of the controversy, the suit claims that “almost the entire faculty of the VCU Arts Department of Painting and Printmaking…signed a letter which named Tapia and concluded that Tapia had been guilty of ‘an act of racial bias’ and ‘implicit prejudice’.”

Tapia also claims that his department chair, Noah Simblist, “sent an email to leaders of the School of Arts” in which he declared, “prior to any investigation, that [Cherry] had suffered an incident of ‘racial profiling’ and that Tapia had ‘inappropriately criminalized’ her.”

Anti-Tapia efforts on campus have continued this semester. The Commonwealth Times reported earlier this month that around 40 students staged a protest in the school’s office of the provost at which Tapia was a focus of attention. Many students inquired about “how they could prevent Tapia from returning to campus and whether it was possible to remove his tenure status.”

The paper reported that Simblist, who witnessed the sit-in, said he was “proud of” the students, commending them for “taking agency and leadership in shaping the conditions of their own education.”

Numerous officials from VCU declined to comment. The school’s general media relations office did not respond to a request for comment on the suit. Suzanne Silitch, a spokeswoman for the School of the Arts, told The College Fix via email: “VCU can’t comment on a pending legal matter.”

Tapia did not respond to a request for comment on the suit; his school email address returned an automated message that read: “Thank you for your email. I am currently out of the office.”

VCU’s human resources office did not respond to a query asking if Tapia’s reported gag rule is standard policy for faculty members placed on administrative leave.

Reached via email, Caitlin Cherry told The Fix: “I am not involved in the lawsuit in any way and I don’t know the status unfortunately.”

The lawsuit states that Tapia is seeking “declaratory, preliminary, and injunctive relief” from the “draconian prior restraint” leveled by the university. Tapia is also seeking to recover “attorneys’ fees and costs,” as well as one million dollars in compensation.

Virginia Commonwealth University has previously been secretive about the events surrounding the controversy last semester. Earlier this year, complying with a Freedom of Information Act request filed by The College Fix, the school refused to release several dozen emails in which Tapia and/or Cherry were mentioned, citing personnel exemptions. The university did provide The Fix with less than 30 pages of documents, though many of them were heavily redacted.