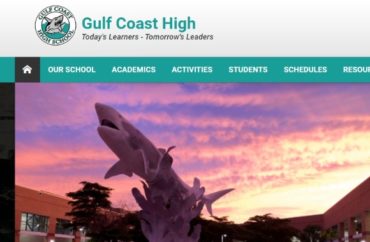 A Florida high school has promised to help a pro-life club get started soon after a public interest law firm threatened to sue the school district for viewpoint discrimination.

Collier County Public Schools went so far as to threaten to fire two faculty members for agreeing to serve as advisors to the nascent Sharks 4 Life, according to a Thursday letter from the Alliance Defending Freedom to the school board, superintendent and Gulf Coast High School assistant principal.

It demanded official recognition for the club within a week, among several other conditions, or “we will have no option but to advise our client [student Gabrielle Gabbard] of other avenues for vindicating her rights.”

The alliance informed the school district that it must “immediately place a litigation hold on all e-mail accounts, document collections, social media accounts, and all other sources of information” related to the club’s efforts to become recognized.

The school district didn’t wait a week to show it took the threat seriously.

“Gulf Coast High School has been and is ready to open the club,” a district spokesperson told The College Fix in an email Thursday night. “The Principal [Joseph Mikulski] will be reaching out to students interested in forming the Sharks 4 Life Club on Monday and finding a sponsoring faculty member.”

He did not respond to the allegations in the letter. An alliance spokesperson could not immediately comment Thursday night on how it would treat the promise from the school district.

‘You better watch it, Linda’

Gulf Coast High School has nearly 80 clubs of all kinds, including for Democrats and Republicans “until this year,” alliance legal counsel Michael Ross wrote in Thursday’s letter. The school district has everything from Young Conservatives and Fellowship of Christian Athletes to the Gay Straight Alliance.

Politicization has long characterized the abortion debate, but Assistant Principal Catherine Crawford Brown did not want the issue debated among students at all, the letter said.

Gabbard had met every deadline and guideline to form Sharks 4 Life in early August, submitting paperwork, writing a club constitution and getting two faculty members to serve as advisors. It’s an affiliate of the national Students for Life of America, which has affiliates at more than 1,200 secondary and postsecondary schools.

Three weeks later, however, it had yet to be formally recognized, according to the letter. The delay threatened the club’s ability to recruit at the early September “Club Rush” event. Gabbard had submitted a club flyer Aug. 27 in order to quality for the event. 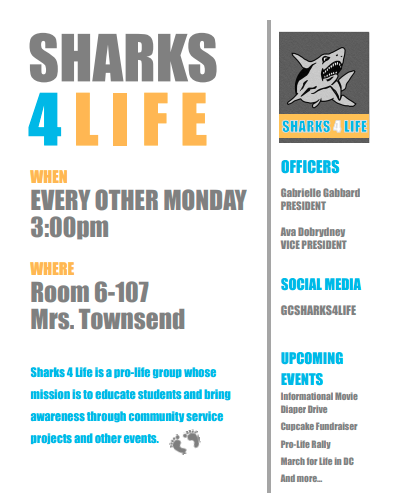 When Gabbard and unofficial club advisor Linda Cassidy met with Crawford Brown Aug. 30 to ask about the delay, the assistant principal told them the club was “too political” and “controversial” to be approved, Ross wrote. She also allegedly said some of the content on the flyer (left) was “unacceptable.” (It does not use the word “abortion” anywhere.)

Several days later, Crawford Brown told club leaders and Cassidy that approving the club “would be seen as endorsing their political views,” according to the letter. The assistant principal allegedly said she wanted neither pro-life nor pro-choice groups on campus, suggesting Sharks 4 Life start an off-campus “grassroots” club.

Cassidy did not take that Sept. 4 meeting as a suggestion. Crawford Brown allegedly told her “numerous times” that she could lose her job if she remained unofficial advisor for the club – a role needed for its recognition. “You better watch it, Linda,” the assistant principal told her, according to Ross.

Cassidy conveyed the veiled threat to Lisa Townsend, the official advisor for Sharks 4 Life, a “single mom” who “was afraid that she would lose her job.” Both informed Crawford Brown and Principal Mikulski they were withdrawing from the club.

It purportedly took a legal threat letter to prompt any response from either the high school or school district as to the status of Sharks 4 Life.

After losing the advisors, Gabbard requested a formal verdict by Sept. 9 since she had waited almost a month for a decision. She had yet to receive one nearly two months later, and the school board did not respond to “multiple” requests from SFLA in late September and early October, Ross wrote.

The failure of the school and district to recognize Sharks 4 Life “is a blatant violation” of Gabbard’s rights under the First Amendment and the federal Equal Access Act, Ross wrote.

They ensure her right “to have a student club that stands on equal footing with the hundreds of other student clubs” in the school district. Precedents from the Supreme Court on down make clear that if a public school allows any “noncurriculum” club to meet at school, the “slightest deviation” from equal treatment toward other clubs violates the law, the letter said.

Ross cited a ruling from perhaps the nation’s most liberal federal appeals court, the 9th Circuit, to emphasize his point. By denying Prince’s Bible Club the same rights and benefits as others at school, it ruled in 2002’s Prince v. Jacoby, the school district “violated either” the Constitution or the federal statute.

In Collier County, the school “singled out” Sharks 4 Life while approving clubs for animal rights, gay rights and the “openly left-leaning” Collier Students for Change, “to say nothing of” 450 political, ethnic-based, religious and “other special interest” clubs the district allows, Ross wrote.

All of Crawford Brown’s (right) actions regarding the club – from her alleged comments on its “controversial” nature to “threaten[ing] and intimidat[ing] the two faculty advisors for the club into silence” – are “expressly disallowed” under the federal statute.

So is the failure of the county to approve the club more than two months after it filed paperwork for recognition, the letter said. It did not provide “any justification” of any validity for rejecting the club, an unconstitutional form of “prior restraint” on core political speech.

Ross demanded not only the club’s recognition by Nov. 14, but also “written assurance” to Cassidy and Townsend that any faculty can serve as club advisor without “adverse action.” The school must appoint an advisor or recognize the club without one if Sharks 4 Life can’t find one “because their viewpoint has been deemed controversial or unpopular by the School,” he added.

The district must agree to update its own procedure on club recognition by Nov. 21, to prevent schools from “denying full access to clubs or indefinitely delaying” a decision on their recognition, the letter said. The procedure should explicitly state no club will face discrimination for its “religious, political, philosophical, or other content of its speech.”