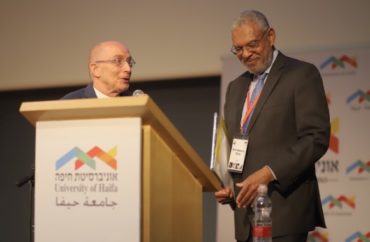 Melvin Oliver hasn’t made many friends at Pitzer College since the president vetoed a legislative council motion to abolish the private school’s study-abroad program at the University of Haifa in Israel.

The faculty senate had previously voted four-to-one to end the program to protest Israel’s policies. It also endorsed the boycott, divestment and sanctions movement against Israel.

The student government demanded Oliver’s resignation for his “anti-democratic decision,” ignoring that Pitzer vests authority in the president to veto legislation.

But the president isn’t fazed. He’s sticking it to Pitzer’s Israel haters by going to Israel and denouncing BDS.

“Academic boycotts of any nation set us on a path of breaking the free exchange of ideas,” Oliver told the University of Haifa’s board of governors at their meeting Tuesday, according to a press release from the American Society of the University of Haifa, which represents the university’s interests in the U.S.

“To boycott a country on the basis of their policies is by definition a blanket indictment of the nation itself, and by extension its citizens,” Oliver said: “This is whether we are talking about Israel and its immigration policies or the United States and its Muslim ban.”

He thanked President Ron Robin for defending the “educational mission” of both institutions: “It is a credit to your institution that in this debate no-one can point to any policies or actions by the University of Haifa that would even be remotely linked to a rationale of suspending our program.”

Oliver lamented that he had become “just another political combatant in what appears to be a never-ending content of assertion and counter assertion. This is the essence of polarized thinking today.”

Robin presented Oliver with a good-luck Middle Eastern amulet known as a “Hamsa Hand” and thanked him for his “principled defiance” of BDS demands to marginalize and isolate Israeli educational institutions.

“This is what inspired leadership looks like, in academia or in any setting,” Robin said.