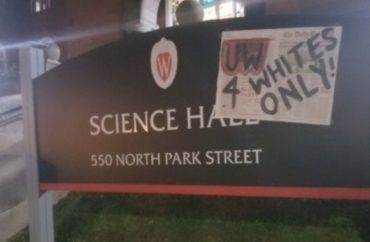 The University of Wisconsin-Madison got fooled by yet another racial hoax.

The administration alerted the community mid-morning Friday morning that a seemingly racist sign that popped up on campus overnight “appear[s]” to have been “part of a protest calling attention to experiences of underrepresented students.”

Messages on the signs included “UW 4 Whites Only.” The administration waved off the possibility it was a hoax in its first response to the signs, tweeting that it “stands against hate and racism” and was investigating the “racist” signs. One commenter quickly raised the hoax possibility.

Two hours later the administration abruptly reversed itself, saying the signs were not actually racist.

If you find the culprit they need to be removed from campus immediately. That is NOT the type of student we need at UW

Update: UW is aware of a series of posters placed around campus.

These appear to be part of a protest calling attention to experiences of underrepresented students.

In a full statement posted late morning, the administration scolded the vandals for violating its policies and possibly harming members of the community, while failing to say whether anyone would be punished:

Early this morning, we became aware of a series of posters placed around campus, including one that used exclusionary language and appeared to be a racist message directed against students of color. This understandably raised concerns about safety and our campus values. We want to be clear that UW–Madison stands against racism and all other forms of hate and any messages of exclusion.

These posters appear now to be part of a coordinated campaign calling attention to experiences of underrepresented students. While we support the right to freedom of expression, we also have policies that prohibit the posting of unauthorized material on campus property. As with any incident like this, we are gathering more information and will be following up as appropriate.

We also want to acknowledge the harmful impact this may have on many students and other members of our campus community.

Other signs that went up overnight included “UW does not care about trans folks” and “I’m tired of having to teach my teachers,” according to the administration’s update, though it’s not clear the latter was posted on campus property.

MORE: Is UW-Madison the next Mizzou?

Update: Multiple posters around campus appear to be part of a coordinated campaign calling attention to experiences of underrepresented students.

“[W]e have been informed that it was part of a protest by students of color,” he tweeted. The administration was considering “next steps” in response to the hoax. The administration’s official messaging has stuck with phrasing that does not refer to the race of the vandals.

Now that the signs have been judged a hoax, the investigation has moved from campus police to the Office of Student Conduct and Community Standards, a spokesperson told the Wisconsin State Journal.

Please be sure to inform interested parties that the matter is being addressed and we are convening this morning to determine next steps. A more formal update will be forthcoming later this morning.

The hoax signs were posted a week after the university mopped up a scandal involving a video created by a student homecoming committee that “featured a nearly all-white student body” and left out the black sorority Alpha Kappa Alpha, which participated in filming, the Journal reports.

One of the criticisms: The video included “people’s butts as they jumped into the lake” but not black students. The end of the video also includes an all-white lineup.

The administration and the Student Inclusion Coalition, which formed in response to the video, created a new video to replace the original. Using footage from the original, it shames the homecoming committee for including so many white faces. The new video instead features nonwhite students.

“We will not be erased,” the video insists. “We are taking a stance with the university not only to be seen, but to be heard. … We are here, we are important. We are UW!” It closes with a group shot that appears to sprinkle in a few white students near the back.

At #UWMadison, we learn lessons best when we learn them together.

This Homecoming, we're partnering with the Student Inclusion Coalition to ensure everyone is seen, heard and valued in our community.

We are all UW. pic.twitter.com/RhKD7UIlgi

We stand with our students of color and hear their voices with a clear commitment to action, not only about the video, but their broader experiences of exclusion on campus. https://t.co/MqOPxudb4C

One of the leaders of the coalition, sorority president Kingsley Pissang, previously told the newspaper the race-shaming video is just the start of the coalition’s activism, which will include “another video and a list of demands for the university.”

The administration apparently nixed more accusatory portions of the video script proposed by the coalition. They include “We are more than smiles on a diversity flyer” – a nod to minority tokenization in UW promotional materials – and “Whether you like it or not, we are Badgers, too.” Pissang said those will be included in a forthcoming statement of the coalition’s position.

Pissang told the newspaper Friday that the coalition was not responsible for the hoax signs.

A spokesperson for the university told The College Fix that it has “not confirmed that this poster campaign was organized by students of color” and that its silence about sanctions should not be taken as a decision on whether to punish any identified vandals.

When reminded that a high-level administration official, Sims, already publicly identified “students of color” as the culprits reported to the administration, the spokesperson said: “I’ve shared all of the info with you that I have available.”