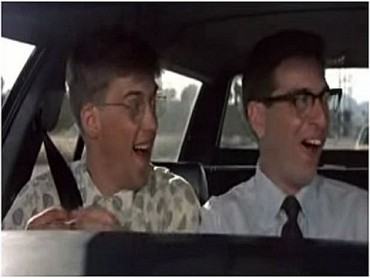 One of my two favorite college movies, as you may recall, is Revenge of the Nerds. Now, granted, it’s a comedy, but it has to be based quite a bit on the reality of the time, right?

That would be the reality of 30 years ago. And it was pretty darn different back then.

Just imagine what the penalties would be today for some of the (mis)behavior witnessed in this film. Almost the entire cast would be disciplined in one way or another, and perhaps even jailed.

If you doubt me, let’s take but a cursory examination …

The film is the classic jocks bullying bookworms-style yarn from 1984 starring Robert Carradine and Anthony Edwards (Goose from Top Gun).

The nerds in the film are all freshmen based on the set-up. The school, Adams College, doesn’t have a real-life analogue, but was filmed at the University of Arizona in Tucson. You might think that back in ’84 the drinking age was 18 in the state. Not quite, but close — it was 19. (It wasn’t raised to 21 until the following year.) So, basically, anytime you see the nerds drinking they’re breaking the law.

The Homecoming Carnival Belching Contest. Nerd “Booger” crushes the other finalist, the jock dubbed “Ogre,” but does so after chugging a brew. And right in front of one of the deans and football coach!

The Homecoming Carnival Mini Bike Race. All of the fraternities have entrants in this race where, after every lap, the rider has to chug a beer. This is even emphasized by the football coach (played by John Goodman). Now, some of the participants are likely age 19 or older; however, the winner is the one who ends up least affected by his drunkenness. Nothing like encouraging alcohol poisoning, eh? Booger’s sexist offenses. Booger is arguably the most offensive nerd of the whole bunch. Not only is he a disgusting slob and card-playing cheat, his wardrobe (t-shirts with suggestive sayings) and crude behavior (grabbing posteriors while slow dancing) would totally scandalize the female population of any contemporary campus. In addition, his constant possession of marijuana would land him in the clink. Nerd Panty Raid on Pi Delta Pi Sorority. As retaliation for the Pis ruining their Lambda Lambda Lambda introductory party, the nerds conduct a “panty raid” on the cheerleader sorority. This by itself would be an egregious offense today; the fact that the nerds walked in on several Pis in a naked state would likely get them booted from school. Not to mention, they set up video cameras and recorded the whole thing. Lambda Charity Fundraiser. The nerds, as the new Adams chapter of the Lambda Lambda Lambda fraternity, are determined to beat the jock frat Alpha Beta at the Homecoming Carnival. They crush their rivals in the charity fundraiser by selling “pies” featuring a naked still from a video they shot during their panty raid: The Adams Football Team is Entirely White. Say what?? Yep. Just check out these two clips — one of the team frat house, and the other of the squad hitting the showers. Coach Harris (John Goodman) would most likely be accused, at the very least, of bias; at worst, outright racism — especially so since in the second clip, one of his players engages in cultural stereotyping by asking if nerd Takashi “knows karate.”

Misbehavior severity level: Moderate
Likely 2015 penalty: Mandatory sensitivity and diversity training for the coach, his staff, and the players; investigation into coach’s recruitment practices; harassment and possible assault charges against player who queries Takashi about his martial arts prowess.