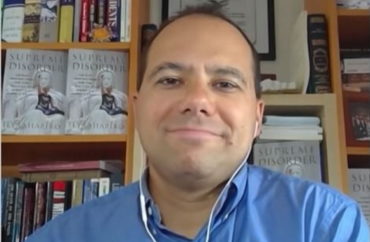 ‘Even in the face of adversity, you do not lie down, but you stand up for your beliefs’

WASHINGTON, D.C. — Ilya Shapiro was the target of a campus cancel culture attack, and he’s lived to tell the tale, but it’s come at a price.

In an interview with The College Fix on Wednesday at a Washington, D.C. coffee shop, the constitutional law scholar said the last four months of his life have been difficult but enlightening.

“It hurt, and you truly find out who your friends are,” he said.

Shapiro was set to become the executive director of the Georgetown Center for the Constitution when his life abruptly changed Feb. 1 after administrators suspended him for tweets criticizing President Joe Biden’s “affirmative action” Supreme Court nomination pick.

“It was four days of hell, followed by four months of purgatory,” Shapiro told The Fix. “I felt like I let everyone down. My friends, colleagues … my kids, my family, and my wife. I felt like I made a horrible mistake.”

Shapiro said that the night of his controversial late-January tweets, people were asking for his opinion as a commentator. So he gave it.

“Even has identity politics benefit of being first Asian (Indian) American. But alas doesn’t fit into the latest intersectionality hierarchy so we’ll get lesser black woman. Thank heaven for small favors?”

“Because Biden said he’s only consider[ing] black women for SCOTUS, his nominee will always have an asterisk attached. Fitting that the Court takes up affirmative action next term.”

The series of tweets effectively defended meritocracy over affirmative action, but the “lesser black woman” wording was taken widely out of context. In retrospect, Shapiro said he had been emotional during the debate leading up to his tweets.

“My advice,” he said, “is to never scroll on Twitter while angry.”

Shapiro has since deleted the tweets and apologized. He described the four months he was under investigation as one of the most difficult times of his life.

It includes a March 1 experience at UC Hastings law school in which he was aggressively shouted down with profanity, insults, chants, desk banging and other measures at a Federalist Society chapter event.

“They screamed obscenities and physically confronted me, several times getting in my face or blocking my access to the lectern, and they shouted down a dean,” Shapiro wrote in The Wall Street Journal.

In his interview with The College Fix, he said he had never been protested before, “not just during this entire controversy, but in my life.”

He said it’s during this time he found out who his true friends really are, as some people he counted as friends criticized and turned their backs on him during his suspension.

For those who find themselves in the center of a cancel culture firestorm, Shapiro advises to stay calm and always be preparing for how best to respond.

Georgetown reinstated him earlier this month, announcing that since Shapiro’s controversial tweets occurred before he started his job, he could not be disciplined for it.

Shapiro said he felt officials dragged their feet on reinstating him to avoid campus protests during the semester and to keep backlash to a minimum.

What’s more, the victory came at too high a cost.

According to Shapiro, the law school dean and the Institutional Diversity Equity and Affirmative Action division at Georgetown were “setting him up to fail and be fired in the future.” Any minor offensive comment or any action considered “out of line” — even if it was unintentional — could lead to his termination under the school’s policies, he told The Fix.

Writing in The Wall Street Journal, Shapiro pointed out that “IDEAA makes clear there is nothing objective about its standard: ‘The University’s anti-harassment policy does not require that a respondent intend to denigrate.’”

With these parameters in place, Shapiro said he saw no way of being able to fulfill his duties at Georgetown. After several long and hard conversations with both his wife and Randy Barnett, the faculty director of the Georgetown Center for the Constitution, he said he decided to resign shortly after he was reinstated.

“I had talked to my closest advisors, Randy Barnett, my lawyer, my wife, and they all agreed. The relationship between me and Georgetown was untenable,” he told The Fix. “There was no way around it. I felt like they had put me into a position where I could not fulfill the duties that I was hired to do.”

Shapiro said he heard nothing from Georgetown in response except that the dean had accepted his resignation.

More recently, Shapiro announced he would be joining the Manhattan Institute for Policy Research as a senior fellow and director of constitutional studies.

He told The Fix that he has no ill wishes toward Georgetown and is excited to begin this new chapter with the Manhattan Institute to defend America’s legal and intellectual traditions.

“Even in the face of adversity you do not lie down, but you stand up for your beliefs,” he said.