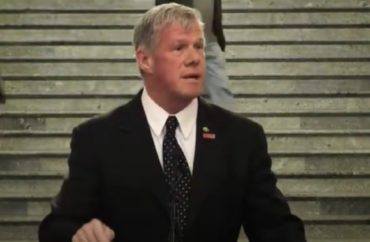 An Iowa Republican state senator has once again introduced legislation to eventually eliminate tenure at the state’s public universities.

Brad Zaun’s (right) legislation would forbid “the establishment or continuation of a tenure system for any employee of an institution” according to the legislation. It would apply to any higher education institution “governed by the state board of regents.”

“I don’t think anyone in our universities should be guaranteed a job,” Zaun said in a recent interview with Iowa radio host Jeff Angelo.

“What happens in our private sector should be applied to our universities as well,” the state senator said. He also criticized sabbaticals that take the professor away from the classroom as well as the use of teaching assistants to teach classes. “That is disingenuous” to parents and students who pay money for those classes.

Zaun did not respond to two emailed requests from The College Fix seeking comment on his legislation in the past two weeks.

The Fix asked what his desired outcome if this bill is, if he had any concerns about endangering the positions of professors who may have unpopular views and if there are other methods that could be employed to hold professors accountable.

However, it faces opposition from colleges and industry groups. Opponents of Zaun’s legislation include the Iowa City Area Chamber of Commerce and the Board of Regents for the State of Iowa and the Iowa Association of Independent Colleges and Universities. The Iowa Cattlemen’s Association is also in opposition, according to lobbyist statements filed with the state.

Opponents of ending tenure argued it could lead to a loss of medical and scientific researchers.

However, the state representatives supporting the legislation disagree with Mascher.

“In the real world, if you mess up, and you mess up that bad, you’re fired,” Skyler Wheeler said in the subcommittee.

“I understand what some of you guys are making arguments for. But good professors aren’t going to be fired,” Wheeler said.

The Fix reached out to Gretchen Gould, the secretary of the University of Northern Iowa Faculty Senate, but did not receive a response to two emailed requests in the past two weeks. The Fix asked Gould about any potential concerns she had about the legislation.

The legislature did not have video of the actual subcommittee meeting. The next step for the House legislation would be a committee vote, though that has yet to be scheduled.

About the Author
Kat Mouawad
College Fix contributor Kat Mouawad is a sophomore at Palomar College. She plans on transferring into the University of California system to study economics and mathematics. She currently represents the student body at Palomar as the executive vice president and as a student senator in the student government. She enjoys competing in speech and debate.