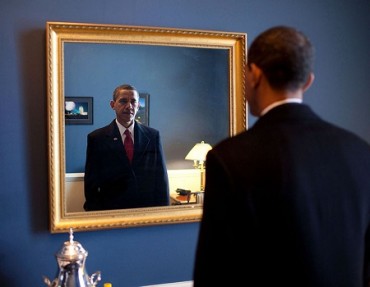 I felt a chill run up my spine when I first saw President Barack Obama’s campaign ad last month. “Will you wish Barack a Happy Father’s Day?” the campaign ad read. Lately, in fact, a lot of the Obama campaign’s ads have been weirding me out.

The president’s Father’s Day ad was written as if it were a personal note to me from Michelle Obama. “From coaching basketball to knowing how many Jonas brothers there are, Barack is a pretty cool dad,” Michelle wrote. “This Father’s Day I want Barack to know how much we love and appreciate him back, so I hope you’ll join me in wishing him a happy Father’s Day.”

Let me get this straight: Michelle Obama wants me to let the president know that I “love and appreciate” him?

It’s as if the campaign is asking me to imagine that I am the president’s child and he my benevolent father. Like I said before: This weirds me out. But the more I think about it, the more sense the ad begins to make.

Obama is a passionate advocate of the welfare state, and he has worked tirelessly from day one to give the government more power to manage our lives. Under his watch, the government has promoted government dependency by aggressively advertising food stamps and other welfare programs. And thanks to Obamacare, government panels will soon be making health care decisions for millions of Americans.

Like a parental figure, Obama is positioning himself as the great provider-in-chief. In exchange, he is taking more control of our everyday lives.

And if Barack is our father, then, of course, Michelle must be our mother. Back in May, the Obama campaign sent out a similar message for Mother’s Day — this time purporting to be from the president himself. “I know Michelle treasures every single person who is part of this movement we’ve built,” wrote the president, “so I’m hoping each of you will sign my card to her today. It’ll mean a lot to her. Will you join me in wishing Michelle a happy Mother’s Day?”

All of these messages, of course, end with a plea for campaign donations. All major credit cards are accepted.

Beyond the disingenuous feeling of these pretend personal appeals from the White House, what is most disturbing is the Orwellian tone of the language. Orwell warned us to be on the lookout for Big Brother. Now Obama has positioned himself as the Big Daddy in D.C. — as the father figure.

Are voters supposed to cuddle up in his lap and thank him for all he has done for them?

The Obama campaign has been raffling off private dinners with the first couple for the better part of a year. “Want to meet Barack and Michelle?” the ads ask. “We’ll cover your airfare.” The Wall Street Journal estimates that the Obama campaign has raked in millions this way.

This president isn’t running a campaign; he’s building a personality cult. Obama’s messages claim that he and his wife “treasure” you, and suggest that you are supposed to “love and appreciate” them in return.

Clearly, there are a disturbing number of Americans who are vulnerable to such a message. At political rallies, sometimes dozens faint in his presence. What we are witnessing is a perverse distortion of the presidency. Obama seeks to govern you and at the same time pretends that you are personally precious to him.

Obama is even raffling off invitations to his birthday party. Campaign donors are automatically entered for a chance to win an all-expenses-paid trip to celebrate in the provider-in-chief’s private home in Chicago. If you have ever longed to live out the Obama-is-my-Daddy fantasy in person, this could be your big chance.

If, on other hand, you find mindless devotion to Barack Obama dangerous, unprecedented, disturbing, and, frankly, un-American, then you may not be so eager to enter his house with a carefully wrapped birthday present in hand. Speaking for myself, there’s only one birthday present I’d like to give him, and that’s an early retirement from politics starting next inauguration day.