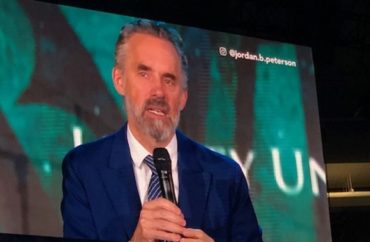 LYNCHBURG, Va. — A young man visibly distraught jumped on to the main stage at Liberty University and cried and sobbed for help during its weekly convocation on Friday, which featured University of Toronto professor and clinical psychologist Jordan Peterson.

The young man, who was later identified as David and was attending the event as a guest, somehow got past security to storm the stage and cry out “I’m not well” and “I need help.”

He was quickly surrounded by security and staff as he crumpled to the ground, sobbing. Then David Nasser, senior vice president of spiritual development, led the entire campus community in a prayer for healing and restoration of the young man before he was ushered off stage.

The incident was a rare occurrence for the weekly convocation, which often features prominent speakers and where attendance is mandatory for students at one of the largest Christian universities in the nation.

Peterson rose to fame several years ago as a conscientious objector to being forced to use people’s preferred gender pronouns in his home country of Canada. After that, his videos on a variety of philosophical subjects have been viewed tens of millions of times, and more recently he authored the book “12 Rules for Life: An Antidote to Chaos.”

Peterson has also been hailed as something of a guru for young men lost and confused in the world today.

Peterson is not a Christian but the themes of his book — confronting one’s challenges and accepting that life is difficult and finding joy during tough times — are similar to ones presented in the Gospel.

Peterson was joined on stage by Nasser as well as the university’s president, Jerry Falwell Jr., and Gary Habermas, chair of the school’s philosophy department.

The incident took place about a half-hour into Peterson’s appearance.

At one point Nasser told those who responded to the incident to “stop, stop pulling him” as the young man sat on the floor of the stage crying in heaving sobs that echoed through the room.

“We pray for healing for him, salvation for him, restoration for him,” Nasser said as he led the campus community in prayer. “God, right now just come into his life and let him know he is valuable to you.”

After David was escorted backstage, Falwell addressed the situation.

“[You] students are probably going through some of the most stressful times of your lives. You don’t know who your spouse will be, what your job will be, you are still finding your way, and so with exams and professors like Gary Habermas here to face, and we have to remember that we’re older and we’re set in life and these guys are just coming up and so you guys will all be in our prayers too,” he said.

Nasser addressed David’s scene by encouraging students who may feel the same way.

“What you just saw is where a lot of you are, but David is just honest enough to cry for help,” he said, adding “some of you are at a place and this is why I think your book has connected with people,” referring to Peterson’s “12 Rules for Life.”

“You’re at a place where you’re just looking for answers, no one ever taught you basic principles of life, basic survival skills, no one ever told you to make your bed or to show up and listen and learn and then the dam breaks and in those moments I’d rather you be here in this context and this community,” Nasser said. “… We think God has you here for more than just an education, but for community.”

“I will be the first to tell you in front of our distinguished guest that these rules work,” Nasser added, referring to Peterson’s book. “But all of them stop short without the ruler, without Christ in your life. And we are here for that.”

Later, toward the end of the convocation, after Nasser had gone backstage briefly, he told the student body that David went to a Bible study the night before with a friend who attends Liberty and that friend invited him to hear Peterson the following morning at convocation.

“Without David submitting, bending his knee to Christ and just saying ‘I don’t want to clean up the behavior or deal with the symptoms — what’s broken in me is my heart,’” Nasser said. “David needs someone who’s omnipresent.”

Nasser encouraged the students that just because someone looks fine, it does not mean they are.

“I know a lot of cleaned up people that are just as messed up as he is. I’m that way,” Nasser said.

Reaction among many students on social media to the incident was compassion. Some students called for continued sympathy and prayers for David. Others weighed in that they thought Liberty leaders handled the situation well. But one critique of the university did garner some social media comments as school officials later ended up editing out the incident from the convocation’s live stream on Facebook. Some on Facebook questioned why that was necessary.

As for Peterson, he appeared to get somewhat emotional when, toward the end of the event, Nasser asked how he could pray for him.

“My fervent hope, and perhaps this is something that can be transformed into a prayer, is that the mistakes … that I am inevitably going to make as I pursue what I’ve been pursing, that I would be careful enough in my speech so that I would stay on the right track, on the straight and narrow path, and fulfill whatever obligations are my privilege to fulfill,” Peterson said. “What I hope from the people that are supporting me is that, if they wish to pray for me, is that I remain careful enough and fortunate enough so that my inevitable faults don’t interfere too catastrophically with whatever good I might be able to do.”

Nasser took to Instagram on Friday night to update the student body on the event.

He told students that David had decided not to take his bipolar medicine that morning and that “allowed his emotions to get the best of him.” Nasser said it is important for students to know that David is part of a local church and has a “strong community and care so he is not alone in this journey.”

Nasser concluded the post by encouraging students to pray for David, as well as Peterson.

Editor’s note: This post was updated to include a status report on David published by Nasser on Friday night.