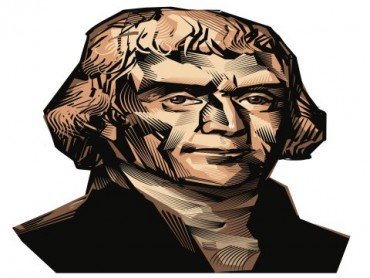 Back on Tuesday he penned a piece for the Columbia Daily Spectator in which he wants his college’s statute of Thomas Jefferson taken down.

You see, Jefferson was a racist and slave owner:

… Jefferson owned more than 600 slaves at Monticello, his neoclassic mansion, and sold more than 110 slaves during his lifetime. In 1794, he launched his nailery and employed slave boys from 10 to 16 years of age and had them flogged and whipped for disobedience. And although his textile factory did not apply as much violence, he still forced young slave girls to spin and weave there.

To justify his ownership of slaves, Jefferson argued that black people’s reasoning capabilities were “much inferior” to whites and stated that black people were “inferior to the whites in the endowment of body and mind.” Jefferson also proposed restricting free blacks from entering or living in his home state of Virginia while he served in the Virginia House of Burgesses, and considered free blacks to be “pests in society.”

Although Jefferson did support the gradual emancipation of black people, he wanted to do so only to resettle black people in a colonized Africa and to create an exclusively white society in America.

What Min is doing, of course, is to impose his 21st century morality onto an 18th century individual (and society).

It’s probably a safe bet that Min would feel just a bit discomfited if travelers from the 24th century came back and chided him about things he takes for granted today.

(Anyone recall Commander Riker on Star Trek: The Next Generation talking about recently discovered humans from the early 2000s: “From what I’ve seen of our guests, there’s not much to redeem them. Makes one wonder how our species survived the 21st century.”)

Would Min argue to the travelers that he is a “product of his time?” Would he argue that he cannot be blamed for not knowing the mores of 250 years hence?

If he’s as smart as evidently the Columbia admissions folk thought, he would.

Merely examine the views towards slavery in the century between 1707 and 1807, the latter being the year the British Empire abolished the slave trade (and the year after, by the way, the United States):

There had been a shifting of the tectonic plates underpinning British life, a shift which produced major changes in sensibility and attitudes. New forms of religious dissent, a more literate populace, the impact of democratic ideals, all and more laid the basis for popular abolitionism (itself made easier in an urbanizing, literate society). In 1807 it was widely accepted that opinion had flowed upwards, not downwards.

Jefferson, like all human beings, was flawed. Though some of his views and actions of over 200 years ago may startle us today, this does not mean we should eradicate him from our reverence as a brilliant founder of a new nation.

This Founder was rather, yes, progressive, in his contemplation of human rights, as evidenced in his letter to Henri Gregoire and his Notes on the State of Virginia Query 18. The same notion applies to Jefferson’s contemporaries, as well.

If we are to begin “erasing” figures like Jefferson due to their “sins,” where does it end? Need we apply the same standard to more recently venerated icons like Martin Luther King Jr.?  What about one of the greatest influences on Dr. King?

As the Pope Center’s Jesse Saffron writes, expunging figures like T.J. isn’t anything at all like those in Eastern Europe who brought down statues of Lenin, Stalin, or Ceausescu at the end of the Cold War.

American college students haven’t had their relatives “disappeared” and/or hauled off to a gulag, after all.

And, if they had lived behind the Iron Curtain, they’d consider their American university the ultimate “safe space” … instead of entertaining the insane notion that it’s where oppression reigns supreme.