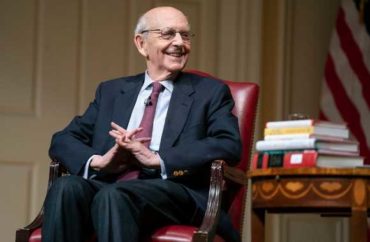 Justice Stephen Breyer will return to teach at Harvard in the fall following his Supreme Court retirement, according to a July 15 Harvard news release.

In one of his last cases before his retirement on June 30, Breyer dissented from the June 21 Carson v. Makin ruling, a landmark school choice case, which compelled the state of Maine to stop excluding religious schools from a public tuition assistance program.

Breyer (pictured), served 42 years as a federal judge and 27 on the Supreme Court.

In his new role, Breyer will serve as the Byrne Professor of Administrative Leave and Process, held jointly with Professor Todd Rakoff.

“I am very pleased to return to Harvard to teach there and to write,” Breyer stated in the release. “Among other things, I will likely try to explain why I believe it is important that the next generations of those associated with the law engage in work, and take approaches to law, that help the great American constitutional experiment work effectively for the American people.”

Justice Breyer “will teach seminars and reading groups, continue to write books and produce scholarship, and participate in the intellectual life of the school and in the broader Harvard community,” the release continued.

“From his pioneering work on deregulation to his ongoing writings about judicial method, Justice Breyer has been one of the most influential contributors to American law and policy for decades,” Martha Minow, former dean of Harvard Law School, stated in the release.

He was replaced by his former law clerk and fellow Harvard Law School graduate Ketanji Jackson, who graduated the Ivy League school in 1992.