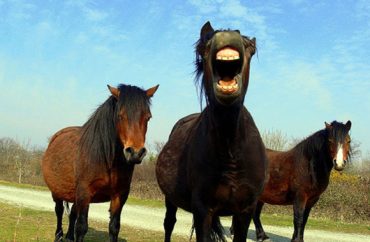 If the Oscar-winning film “Rocky” were made today, the title character might have to come up with a different nickname so that females in the audience aren’t offended.

According to WKYT, the new Frederick Douglass High School in Lexington, Kentucky has quashed its Stallion mascot … due to complaints it is sexist.

Indeed, a Change.org petition was started calling for the Stallion to be replaced:

This is inappropriate and sexist when you consider the definition from “YourDictionary” …”The definition of a stallion is a male horse that has not been castrated, used for breeding or is slang for a powerful and virile man who has a lot of lovers” …

What message does this send to our daughters and granddaughters? Our sons and grandsons?

School officials say they’ve received other community input about the Stallion, negative and positive, but ultimately decided to let incoming students decide on the mascot, albeit keeping with a “horse theme.”

Petition creator Diane Cahill said “I’m very grateful to Superintendent Caulk for listening to our concerns [and] for reassessing this choice by getting input from students [and] parents.

According to the Lexington Herald Leader, Cahill said she thought the petition was appropriate considering that “enough people in the community were raising questions” about the Stallion.

“How did they come up with this? The connotation of stallions pertaining to a girls’ softball team or basketball team just seemed really, really strange to me — a male breeding horse,” she said.

Anita Courtney invoked Title IX, noting that the Stallion “leaves out 50 percent of the student population” and is “not in keeping with the spirit of […] gender equity in sports.”

Another petition signer, Christy Morris, said that the school’s namesake would not approve of the original mascot choice:

“Frederick Douglass was a firm believer in equality for all. … Something tells me that he probably would have found the name to be offensive to (women) and would not represent the whole of your school.”

UPDATE: Two students from Frederick Douglass reached out to The College Fix to inform us of a counter-petition in favor of keeping the Stallion mascot. In an email they say they find Diane Cahill’s “reasons to be extreme and unrelated to the purpose of nominating Stallions as the mascot.”

The petition states in part:

“We as Lexingtonians should take pride in our history and strive to commemorate it, not argue over trivial matters such as the gender of a mascot. We feel our society has become too sensitive to such matters as simple as a school mascot. The point of the Stallions was not to denounce women, but to honor the rich history of the land the school is being built upon. In addition, the Keeneland green color was incorporated into the school to promote Lexington’s profound equestrian history.”