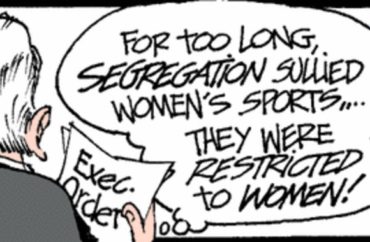 One of my favorite changes to The College Fix over the years was the addition of a cartoonist, Pat Cross, who illustrates themes in our coverage on a weekly basis. His work is consistently popular with readers, though not with Facebook overlords.

Years before we added our own cartoons, however, we started showing up occasionally in the comic strip “Mallard Fillmore.” Its creator Bruce Tinsley even wrote out a hyperlink to a Fix article about a student newspaper columnist who was fired for his hilarious send-up of microaggressions on campus.

The Gannett newspaper chain made the decision “at the corporate level” to dump Tinsley’s work, he told The Washington Times, which still runs his strip. Regular readers started telling him in late January that their local papers had stopped running it.

King Features, which syndicates the comic, told Tinsley “they were sure” it was in response to two cartoons that mocked President Biden and his Jan. 20 executive order that requires schools to allow biological males in female sports.

The first, published Feb. 19, alluded to the frequency of transgender women destroying the biologically female competition in female sports. The second, published the next day, features Biden comparing girls-only sports to “segregation” (above).

Tinsley said he was stating “nothing derogatory about transgender people” but highlighting “a really unfair environment in sports” caused by Biden’s order. A newspaper chain dumping his comic in one fell swoop is “unprecedented” as far as he knows:

His strip has been dropped before — sometimes temporarily, sometimes permanently — but he said those moves were made by local editors on a newspaper-by-newspaper basis, not by corporate headquarters in a decision affecting multiple publications.

It’s hard to overstate how thoroughly Gannett controls – and homogenizes – local print news across the country. King Features already warned Tinsley his “royalty check would be significantly smaller” due to the corporate purge, according to the Times.

Formerly known for its flagship USA Today, Gannett now owns “260 dailies and more than 170 paid weeklies,” including my hometown Statesman-Journal, sometimes derided as the “Statesman Urinal.” Gannett is known for cutting news to the bone in the quest for profitability. Reading the comics may be the only thing tying many print subscribers to their local Gannett rags.

The good thing about an independent operation like The Fix is that we don’t depend on the good graces of corporate behemoths that use wokewashing to protect their bottom lines.

Yes, Facebook falsely claimed that Pat Cross’s latest cartoon about the Dr. Seuss purge was “missing context,” but we don’t need Facebook to reach you, and we’re sure you don’t put much credence in what Facebook thinks.

Just bookmark our website or sign up for our twice-weekly newsletter, and you’ll help us strike a blow against cancel culture for many years to come.