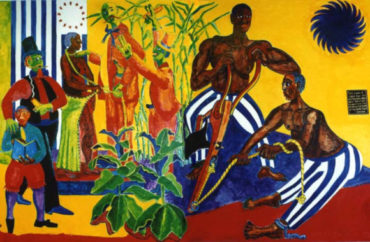 In December, artist Sam Kerson sued the Vermont Law School for threatening to cover a campus mural he painted in 1994 depicting the state’s role in helping freed slaves via the Underground Railroad.

The school has now responded, arguing that although the mural has “beneficent intentions,” some students and faculty members consider it “caricatured and offensive.”

According to the school’s motion to dismiss the lawsuit, the anti-slavery mural has “become a source of discord and distraction at Vermont Law School—an institution whose explicit mission it is to educate students in a diverse community.”

Kerson, who is white, said in celebration of Black History month he objects to the murals being covered.

“These murals are the only mural statements of the abolition movement in Vermont,” Kerson told The College Fix via email.

“They are an important acknowledgement of Vermont’s role in Black history and we object to their being covered during this time of memory and reflection,” he said.

Kerson, who now lives in Quebec, Canada, has argued his mural, Vermont, The Underground Railroad and Vermont and the Fugitive Slave, is protected by a federal law known as the Visual Artists Rights Act.

In his lawsuit, Kerson argues the 1990 law safeguards artists’ works from “distortion, mutilation, or other modification … which would be prejudicial to [their] honor or reputation” and “protects works of ‘recognized stature’ — including murals in buildings in particular-from intentional or negligent ‘destruction.’”

Kerson argues his reputation will be “irreparably harmed” if his most notable work is “distorted, mutilated, modified, or destroyed without his consent.”

Initially, the school planned to paint over the mural, which consists of two panels painted directly on the walls of the Chase Community Center. Instead, the school covered the mural with drop cloths, intending to later cover the entire painting with acoustic tile, according to the lawsuit.

Glenn Berger, a member of the VLS Board of Trustees, said the board is “supportive of and sympathetic to the many students, faculty and staff, and other members of the VLS community who find the mural offensive because of how it caricatures enslaved Africans specifically and casually stereotypes Black bodies in general.”

In a statement sent to The Fix, Berger said the board does “not believe VARA prohibits covering the work, and we will do so until the Court has resolved this matter.”

On July 6 of last year, second-year law students Jameson Davis and April Urbanowski wrote an open letter to VLS Dean Thomas McHenry urging removal of the mural. It was co-signed by over 100 students, faculty, staff and alumni.

Davis, who is black, had previously called Kerson on the phone to urge the artist to join him in calling for the painting to be removed.

In a court filing, Davis said that during their conversation, Kerson “focused on his intentions in painting the mural, and did not seem able to comprehend that his artistic intentions, even if good, were an entirely separate question from how the mural was received by and impacted Black viewers.” 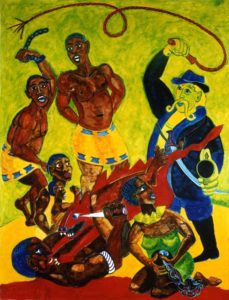 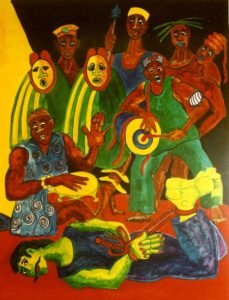 Davis said he had other problems with the mural.

“Not only does the mural stereotype Black bodies, but the first panel paints the slavers as green, and the second paints the abolitionists as white, thereby dissociating the slavers from whiteness and its associated power and dominance,” he said in the court filing.

“The first panel also depicts some of the enslaved people having captured and tied up a white man, inaccurately suggesting that the Africans had the ability to defeat their enslavers,” Davis said.

Kerson told The Fix that his painting is a “celebration” of a law passed in Vermont in 1850 that required the state’s judicial and law enforcement officials to assist captured fugitive slaves.

“This is the only celebration of the Abolition movement on a wall in Vermont and it is being sequestered by the VLS during Black History Month,” said Kerson.

The first scene of the first panel shows a slaver forcing Africans into bondage and bringing them to America. Other scenes in the panel depict a slave auction, the oppressive working conditions under which slaves worked, and a slave rebellion.

The entire second panel depicts the path to abolition, with Frederick Douglass giving a speech, Union soldiers at war, Harriett Tubman operating the Underground Railroad, and free slaves heading to the Canadian border.

“While the panels of the mural had plaques explaining what it was intended to represent, the plaques could not disguise the over-exaggerated depiction of Black persons – large lips, startled eyes, big hips and muscles eerily similar to ‘Sambos’ or other racist coon caricatures—that seemed completely at odds with the stated mission of Vermont Law School to promote diversity and to support students of color,” said Davis in his court filing. 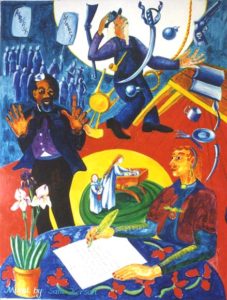 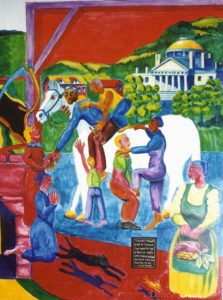 According to his lawsuit, Kerson’s works have been acquired by the Library of Congress, the National Archives of Canada, the New York Public Library and numerous college and university libraries. He said he is currently negotiating with the city of Trois-Rivières in Canada to sell them two paintings, one of which refers to the current Underground Railroad in France.

If the school has “destroyed, disfigured, mutilated or otherwise modified” the mural, Kerson’s lawsuit requests $150,000 per panel.

Kerson is represented by Steven Hyman, a New York-based attorney who also represented the sculptor of the Charging Bull statue in Wall Street’s financial district, when the sculptor argued the addition of the nearby “Fearless Girl” statue infringed on his artistic rights.