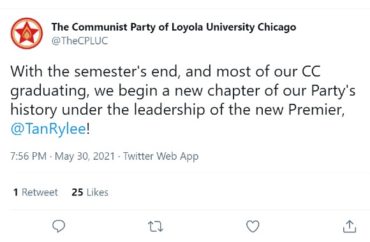 Editor is the new ‘Premier’ of Communist group

The new “Premier” of Loyola University Chicago’s unofficial Communist student group is also an editor for the Loyola Phoenix.

“With the semester’s end, and most of our CC graduating, we begin a new chapter of our Party’s history under the leadership of the new Premier, @TanRylee!” the Communist Party of Loyola University Chicago announced on Twitter on May 30.

With the semester’s end, and most of our CC graduating, we begin a new chapter of our Party’s history under the leadership of the new Premier, @TanRylee!

— The Communist Party of Loyola University Chicago (@TheCPLUC) May 31, 2021

Rylee Tan is also the “co-managing editor” of the campus paper and he previously worked as its opinion editor.

“I’m lucky to have some awesome people by my side,” Katie Anthony, the graduating editor-in-chief said in a May 12 column. “Zack Miller and Rylee Tan will be serving as Co-Managing Editors.”

Tan also worked at the Chicago Sun-Times, one of the major papers in the city.

As an opinion editor, Tan wrote pieces in support of unionization and higher wages, while also writing news articles that covered union demands on campus. Other news articles from last year cover COVID news both nationally and as it related to Loyola.

Tan also said that “imperialism” contributed to violence against Asians. 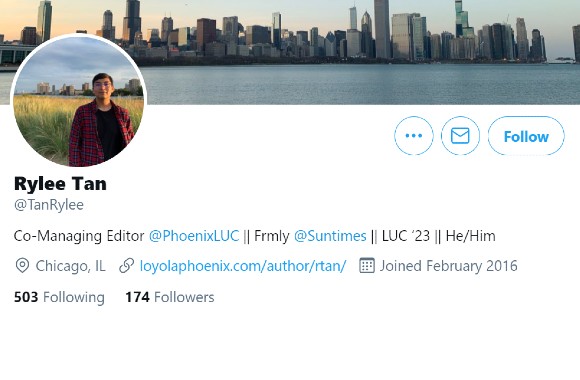 “In watching and reading about the rallies all over the country, one aspect of anti-Asian violence — arguably one of the most important — continues to be left out of mainstream discourse,” Tan said. The aspect left out, according to the newspaper editor, is “the connection between anti-Asian violence at home, and U.S. imperialism abroad.”

“There’s plenty of work to be done internally, other important aspects I’ll touch on in the coming weeks,” Tan wrote on March 30, soon after the killings at a spa in Atlanta.

“But one of the most impactful ways the U.S. can stop Asian hate is to stop U.S. imperialism in Asia,” he said.

The paper says it follows the Society of Professional Journalists Code of Ethics, but those standards say that journalists should “avoid political or other outside activities that may compromise integrity or impartiality, or may damage credibility.”