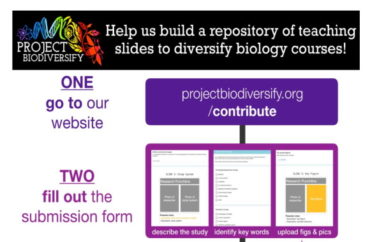 ANALYSIS: To reduce purported harms inflicted upon LGBTQ students, scholars exhort colleagues to adapt biology lessons that affirm rather than deny the identities, experiences and beliefs of such students

In some classroom activities, students and teachers together have replaced terms like “mother,” “father” and “biological parent” with the more inclusive neologisms “gene givers,” “storks” and “Biological Life Transmitters” – or “BLTs” for short.

This anecdote represents the current trend in biology, and it shows no signs of slowing.

Activists within STEM demand biology be more welcoming to LGBTQ students by doing more to affirm their identities — even if that means overhauling how several important topics are taught — to reduce purported harms inflicted upon LGBTQ students.

The argument is that biology lessons wrongly present binary sex and heterosexual behavior as the norm in nature, with exceptions being treated as special cases or atypical abnormalities.

Earlier this year, a group of scholars detailed in an article several ways instructors could diversify biology lessons, the most notable being to “teach diversity first” and “use inclusive language.”

In practice, this means adjusting biology lessons to present examples of reproductive and developmental processes and sexual behaviors that differ from those of humans and other mammals earlier and more frequently than may be typical today.

The advice was doled out by Project Biodiversify, an effort once supported by the National Science Foundation that serves as a repository for gender-inclusive teaching materials for biology instructors.

1. Help take the burden off of BIPOC biologists to be represented in bio courses!

Karen Hales, a professor of biology at Davidson College, has also offered several suggestions for how to diversify biology lessons.

“Female anatomy/organs” should be replaced with “Egg-conducting and gestational organs,” she advised. “Mother” and “Father” should be swapped for “Egg parent” and “Sperm parent,” respectively, Hales wrote in a May 2020 essay.

In an article published on the website of the National Science Teaching Association, a trio of science teachers from Gender-Inclusive Biology, an organization similar to Project Biodiversify but with a focus on K-12 education, have suggested teachers and students co-create substitutes for problematic words.

They are the ones who reported on how teachers and students came up with a way to replace the term “parents” with “Biological Life Transmitters.”

As drastic as some of these changes may sound, those proposing them argue these curricular adjustments benefit LGBTQ students and those from non-traditional families by making them feel more included.

They also argue the changes benefit every student, as they lead to biology being presented in a more accurate manner.

Reptiles with temperature dependent sex determination, sex-changing clown fish, and fungi with potentially thousands of mating types are just a few examples of naturally occurring biological phenomena that proponents claim get ignored when biology instructors focus their lessons too narrowly on what is purportedly normal for humans.

Hanna Kokko, an evolutionary ecologist from the University of Zurich, has previously noted how evolutionary theory is biased by a human perspective that influences matters ranging from sex, reproduction and sexual selection to inbreeding, sexual jealousy, and cooperation in organisms biologically different from humans that do not share human morals or mores.

A group of authors from the Tree of Sex, an organization that maintains a database containing information on the sexual systems of thousands of organisms, made similar points in a 2014 essay on diversity in sex determination across the tree of life, highlighting many of the same organisms discussed by those trying to make biology more LGBTQ-friendly.

However, contained in these works that focus on human bias, there is usually still some basic acknowledgment of binary sex, at least for organisms that exhibit some basic sex differences – even if they are only at the gametic level.

Those who frame these discussions in terms of LGBTQ inclusivity generally discuss sex and gender binaries as outdated concepts rejected by an ill-defined scientific consensus, often coupled with the assumption that sexual and developmental processes different from those of humans in other organisms affirm every letter of the LGBTQ alphabet and beyond.

The trio of science teachers from Gender-Inclusive Biology, for example, opined, “When we normalize gender and sexual diversity in natural phenomena, we celebrate and affirm all student experiences.” 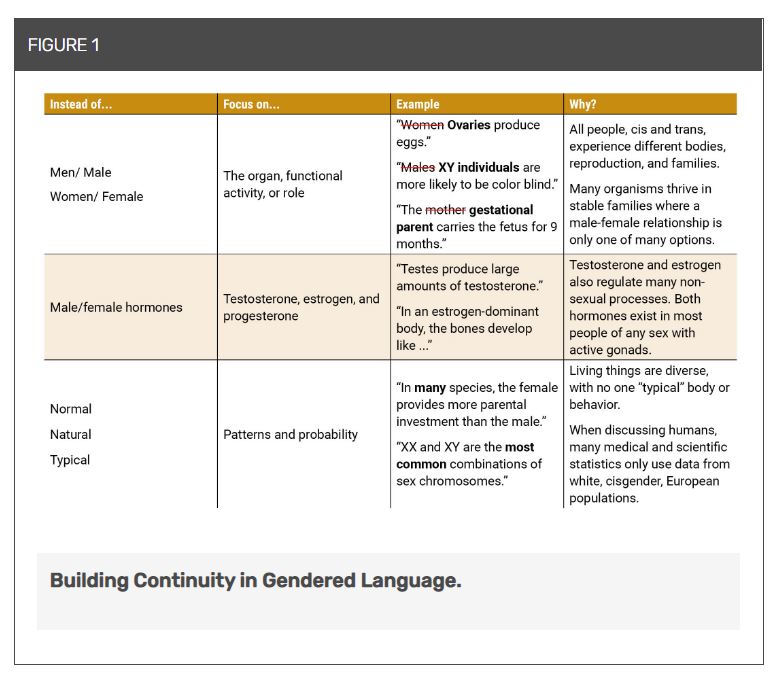 Within these commentaries and reports on the need to make biology more inclusive for LGBTQ students there is also a sense of confusion or frustration as to why more biology instructors fail to update their presentation of numerous key concepts accordingly.

“Biology courses are unique among STEM disciplines in that examples and concepts taught in core courses touch on sex, gender, and orientation,” wrote a group of researchers, led by Sarah Eddy of Florida International University, in a 2022 report detailing the biology classroom experiences of five LGBTQ students.

Eddy and her fellow co-authors noted several examples of phenomena in nature that supposedly challenge notions of gender essentialism, but lamented how “Instructors did not seem to intentionally hold these examples up to counter gender essentialism.”

They also noted one student’s disappointment that when discussing hermaphroditic plants, “their instructor did not make [a] connection between plants and humans” and how therefore “the example did not reach its true potential to validate queer identities.”

Neither Eddy and her co-authors, nor the other researchers and activists calling for these changes to biology curricula, specifically explain how, for example, plant biology validates all queer identities, some of which may be socially influenced.

Yet, many of them do seem to be in agreement that the failure of biology instructors to do so warrants further work to make biology more inclusive lest more LGBTQ individuals be harmed or driven from the field.

Research has suggested that, compared to their non-LGBTQ peers, LGBTQ students aspiring to earn STEM degrees upon entering college are more likely to switch majors by the end of their fourth year.

Although the exact reasons for these outcomes are unclear, one supposition is that STEM’s emphasis on objective impersonality, and its focus on merit over identity and technical ability over social ability, are unappealing to LGBTQ individuals.

Another is that popular stereotypes regarding scientists drive away members of the LQBTQ community.

For example, Jonathan Freeman, associate professor of psychology at Columbia University, has speculated LGBTQ individuals, as well as heterosexual females, may be put off by the stereotype that STEM is more thing-oriented than people-oriented, or by the presence of “stereotypically masculine signals in STEM environments,” such as video games and Star Trek posters.

To remedy these perceived problems, many critics have recommended the standard prescription of workshops, increased representation in instructional materials, and further norming the practice of volunteering one’s pronouns.

Some activists, however, argue such measures are not enough, especially for the field of biology, claiming the discipline is specially positioned to either affirm or hinder LGBTQ individuals.

To reduce purported harms inflicted upon LGBTQ students, the authors of this article and others exhort their colleagues to adapt biology lessons to affirm rather than deny the identities, experiences, and beliefs of such students.