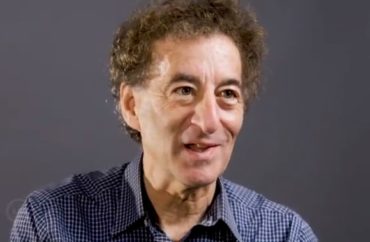 Student activists offended by his ‘pigs at the trough’ metaphor

When a meteorologist blogged against a carbon tax proposal supported by his fellow faculty members, he quickly became a target for climate activists, students and colleagues on campus.

The University of Washington’s Cliff Mass, a professor of atmospheric sciences with his own weekly weather segment on public radio, accused the College of the Environment of “serious violations of freedom of speech and academic freedom” on his blog last week.

While his colleagues used their UW affiliations to promote Initiative 1631, a carbon tax proposed by Democratic lawmakers that failed at the ballot box last November, Mass claims that his opposition “had no connection” to the university.

His personal posts against I-1631 led to a social media campaign by UW students calling him “racist, misogynistic, a climate denier” and worse, Mass wrote.

The Atmospheric Sciences Department even held a meeting where colleagues and students shamed him for his views, according to the professor, with one issuing “a direct threat.” He characterized it as “more like a spectacle at the Roman Coliseum than an academic proceeding at a leading research university.”

Mass told The College Fix that he was the only professor at the University of Washington that actively opposed the measure, as far as he knows. He is “unsure” whether he will seek legal counsel to consider his options against UW officials.

But he’s pleased with public support he’s received: “hundreds of supporting emails, including dozens of faculty.”

The university is downplaying the internal campaign against Mass and interprets the timeline differently than Mass’s account, which alleges multiple policy and constitutional violations by College of the Environment and Atmospheric Sciences Department leaders.

A UW spokesperson told The Fix that Mass was never “disciplined” and that his tenure was never “in jeopardy,” and Lisa Graumlich, his dean, echoed the university’s explanation.

“The College leadership’s version of these myriad events differs from Professor Mass’s descriptions, but let me be clear that his tenure and faculty position have never been in jeopardy,” she wrote in an email:

Professor Mass remains a tenured full professor at the University of Washington, with all the rights and responsibilities of that position. If he believes that a violation of Faculty Code has occurred, the University has mechanisms for resolving these complaints.

When The Fix asked Graumlich (left) to clarify her version of the timeline, which goes back about a year, she did not respond to followup emails.

According to Mass, neither President Ana Mari Cauce nor Provost Mark Richards had addressed the situation when he wrote his accusatory post last week. He’s speaking up now that an internal mediation process has concluded.

The UW spokesperson refused to give a straight answer to multiple queries by The Fix on whether it will conduct an internal investigation into Mass’s claims.

“The protection of free expression and academic inquiry at the University of Washington are cornerstone values,” the spokesperson said. He portrayed Mass’s allegations about policy and constitutional violations as a matter of “robust discussions, and even passionate disagreements,” that can cause “discomfort and disagreement.”

‘Potentially an illegal use of university resources’

Mass is known far beyond the halls of academia, at least in the Pacific Northwest. He even makes an appearance by name in the Seattle-based 2012 novel “Where’d You Go, Bernadette,” which was turned into a movie that debuted this summer.

In 2011 The Seattle Times called him “the closest thing to a celebrity scientist in Seattle” because of his outspokenness on various issues, including “the need to communicate science.”

He had just been dumped by Seattle’s NPR affiliate for what it characterized as his tendency to stray from weather into unrelated issues, including math education and even UW’s admissions process. (Another Seattle-area NPR affiliate picked him up.)

Mass explained his opposition to I-1631 in terms of its regressive structure, which would “disproportionately” harm low-income people, as well as its distribution of collected taxes “by a board dominated by politically connected groups.”

He had supported a previous proposal with a carbon tax twice as high as I-1631’s. “I agreed to be a signatory for the statement against I-1631 in the official voter’s pamphlet and did a few blog posts on the subject” without mentioning his university affiliation, Mass wrote in his blog post.

In contrast, most faculty members in Mass’s department signed a letter to the editor in support of the initiative, including Chair Dale Durran. They used their UW affiliations. So did Dean Graumlich and several associate deans, including Robert Wood, who also signed public statements supporting I-1631, he claimed.

Mass claimed that Durran, “who has substantial influence over salaries, sabbaticals and advancement in the department,” asked faculty to sign the statement. Durran’s letter was also posted on the college’s Program on Climate Change website, which Mass called “potentially an illegal use of university resources.”

MORE: Lawsuit says professors could lose tenure under new rules for not being nice

UW student activists claimed Mass was on the payroll of Charles and David Koch, the billionaire industrialists, and circulated images of his face next to a barrel of oil with a heart in between. Seattle alt-weekly The Stranger called him “Trump’s Weatherman.”

But some were outraged when he referenced the metaphor “pigs at the trough” in a blog post to describe the initiative’s distribution of carbon taxes by special interest groups. They complained that Mass was showing racism toward minority groups that supported I-1631.

Student activists convinced both department and College of the Environment leaders to write a “civility” letter that was sent to students, staff and faculty across the department, explicitly shaming Mass.

The letter, which Mass did not post, claimed that his blog post “included imagery and text that was racially insensitive and caused offense.” It continued: “Racism is in direct contradiction to our shared values and has no place in our college.”

A UW spokesperson confirmed to The Fix that “[s]everal people expressed offense and opposition to what they viewed as his comparing Native Americans and others to pigs.” Mass insisted that his metaphor – an unexplained image, without text – was not directed at minorities, though he has since deleted the image.

Other than Graumlich, signatories to the letter – Durran, Wood, Dean of Administration Stephanie Harrington and Assistant Dean of Diversity Terryl Ross – did not respond to Fix queries.

Mass called the letter “not only inappropriate and arguably unethical but a violation of University of Washington faculty code, including the protection of academic freedom.” 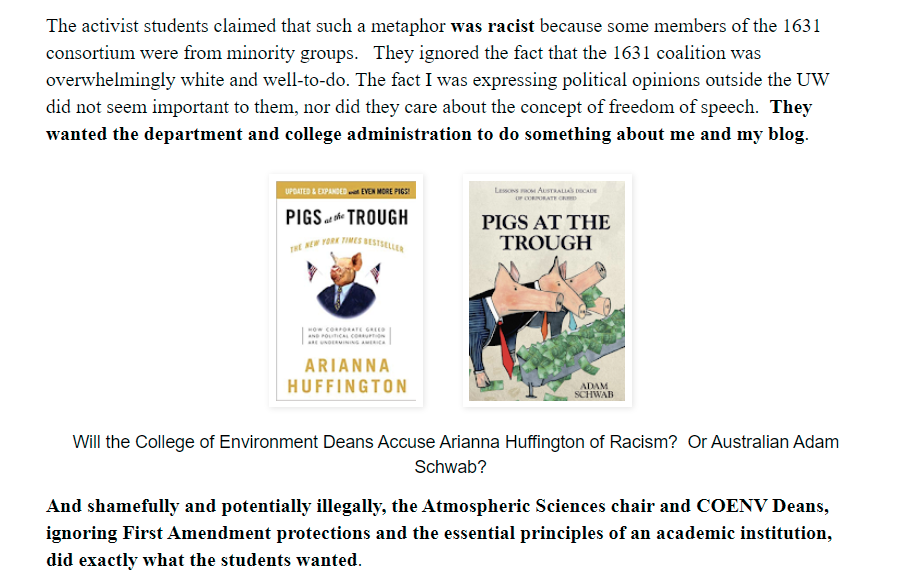 Other faculty said ‘they were afraid to speak in my defense’

When Mass protested the letter as “illegal and unfair,” Durran called a departmental meeting “with the knowledge” of Graumlich’s office to discuss the dispute.

“With the promise of both controversy and catered food, there was a large crowd,” Mass wrote.

Durran (below) called upon “offended” students and others at the meeting to criticize the blog post. The chair started “screaming” at Mass when he tried to defend himself by talking about freedom of speech. Durran then returned to calling on students, one of whom told Mass he would be “held accountable.”

“It was a direct threat. And no one said a word about it,” Mass wrote.

Once it was over, some faculty told him that “they were afraid to speak in my defense.” A professor from China who “lived through the Cultural Revolution told me it was exactly like the shaming sessions of Maoist China,” according to Mass.

All this left the professor with the impression that the shaming event violated the faculty code “and the basic principles of the university.”

There are “different viewpoints on what transpired” between Mass and administrators throughout the dispute, the UW spokesperson told The Fix. But the most specific he would get was saying that the administrators’ letter in response to Mass’s blog post was not an attempt to censor him.

The university flat-out disagrees that Mass’s colleagues acted unethically or illegally by advocating for I-1631 while using their UW affiliations.

“Under state law, university employees are only barred from using state resources to advocate for or against a candidate or ballot initiative,” the spokesperson said. “[T]his is materially different from using expertise to comment on the effects of proposed legislation.”

As to what the university will do in response to the string of events, that’s up in the air. According to Mass, the secretary of faculty has no plans to implement policies on the suppression of faculty social media, since that person “does not have the authority” to do so.

“It is really up to the high administration and Regents of the UW,” Mass told The Fix in an email.

(While Mass told The Fix that a “chapter” of Heterodox Academy, which defends viewpoint diversity on campus, is being formed at UW, a spokesperson for the group told The Fix Tuesday that it does not have chapters. It has individual members at institutions including UW.)

The University of Washington Should Not Censor Faculty Social Media https://t.co/0IhKO6SCNs pic.twitter.com/FVtGGry1jx

CORRECTION: The initial article mischaracterized the organizational structure of Heterodox Academy. It has individual members at institutions including UW but not “chapters.” The article has been fixed.