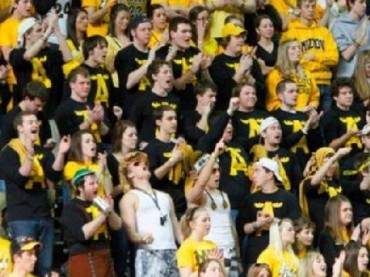 “Scum, scum, scum – go back to where you’re from . . .” is a chant that could be heard at any given University of Missouri Tiger basketball game over the years as Mizzou fans taunted opponents.

That ear-catching howl is the progeny of an MU cheer group called The Antlers, formed in 1976 by a small cadre of students in the hopes of generating interest in the university’s basketball team. It was created to cause a stir. Their “scum” cheer is more than 10 years old.

But now, the sing-song has been deemed mean-spirited and unsportsmanlike conduct and banned from games. The die-hard fans who “bleed black and gold” and sung  the ‘ol chant? Kicked out.

Group members were forced out of their seats, down the aisles of the auditorium and, eventually, out of the MU arena during games against Indiana University – Purdue University Indianapolis and Gardner-Webb University.

“This is actually laughable to me, but let me just say this … we have high expectations for our students and our staff at the University of Missouri,” Alden told reporters. “Our core values are respect, responsibility, discovery and excellence, and it’s critically important that we represent those values every day in everything we do.”

The ejection was made only a day after MU junior Emmett “Sir Loins” DeLaney, the group’s Grand Poobah, met with officials from the university, including the vice chancellor for student affairs, to discuss so-called appropriate cheers.

Campus officials laid out a list of things the group had said deemed inappropriate. The list included: “Drink Herpes Slurpees” and “Just Like Last Night Put It In The Holes.”

During one game, the group chanted “just take him back out and throw him in a dumpster” after a player on the opposing team was injured. During the same game against Southeast Louisiana, they called out “raise your hand if you thought Hurricane Katrina was a good thing.”

The list also included comments on the back of some Antler’s T-Shirts, such as “Microsoft Turd,” “The Little Spermaid” and “Raging Broner.”

DeLaney said his group agreed to tone down its bawdy cheers and chants, saying the jokes “were cheap, easy humor, and we just kind of thought ourselves better and tried to make a little more humorous jokes and be less offensive and crude.”

The venerable shout “scum, scum, scum, go back to where you’re from … and die!” was changed to “and cry,” the group taped over some of the more over-the-top comments on their T-Shirts, and generally agreed to keep it cleaner.

But the changes were apparently not enough.

The chant that got them kicked out the second time around was: “Pelvic thrust, churn the butter, step to the left, cop a feel.”

“Then they booted us right after that, and while we were down there, they said references to sexual content won’t be tolerated inside the arena,” DeLaney told the Columbia Tribune.

It’s the same chant the group has used for years, and it wasn’t on the list of offensive phrases the university gave the group.

One member of The Antlers, MU Junior Kasey Devine, told The College Fix he felt the group was unfairly silenced.

“We were doing what we always do . . . pushing boundaries, but doing it in a way that we thought was appropriate,” he said.

It became difficult, he added, when administrators prohibited chants on the fly and made arbitrary decisions about what are and are not appropriate cheers.

Devine said he believes the university’s recent ascension into the Southeastern Conference, a much larger venue than its previous position in the Big 12, was the catalyst for the change in the university’s new crackdown.

Devine said The Antlers did edit and tone down their cheers, but administrators continued to act like the Gestapo.

“We were led to believe that our tried-and-true rant, ‘scum, scum, scum go back to where to you’re from’ was appropriate for game time,” he said.

University of Missouri officials did not respond to repeated requests by The College Fix to address the constitutionality of banning chants, whether they went overboard when they banished their own student fans from games, and if the stricter rules are a result of the team’s new position within the Southeastern Conference.

The Antlers continue to attend games, toned down their chants further, and all the while some members remain skeptical about the neutering of First Amendment rights by those in the hallowed halls of college administration-especially given the conflict with the profitability of university sports.