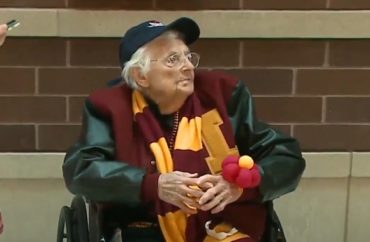 The 102-year-old superfan is traveling with the team to kick off the NCAA Tournament. She will be alongside Loyola Chicago when they take on the Ohio State Buckeyes at PPG Paints Arena in Pittsburgh, the school’s associate athletics director for communications Bill Behrns confirmed.

…Sister Jean gives advice to the players, sent [former head coach] Porter Moser scouting reports ahead of each game and is the team’s captain [chaplain]. Last year, she went with the Ramblers to Indianapolis and was alongside them as they made it to the Sweet 16 following an upset over top-seeded Illinois.

“These young people keep me young, even though I’m 101, I consider myself young at heart,” she told reporters last year.

COVID restrictions almost kept the Catholic religious sister away from March Madness in 2021, though some boosters were willing to do whatever it took to get her there, in case the university did not relent.

“One alum wrote and told me that her husband was willing to drive me down,” she told reporters. “Another person told me she was going to sneak me out of the university, and another couple said they would like to kidnap me, and Loyola would have to search for me.”