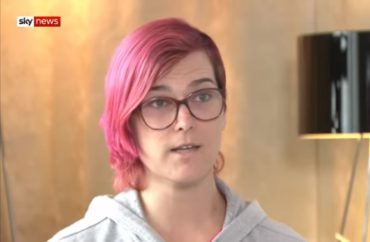 For the second year in a row, a male professor who identifies as female has won the gold medal in the Masters Track Cycling World Championship for the women’s division, ages 35-39.

McKinnon has not been shy in responding to criticism from biologically female athletes who claim the transgender professor has an unfair advantage by virtue of a male body.

When tennis great Martina Navratilova called for the exclusion of biological men from women’s sports, McKinnon responded that it would be the same as excluding black women.

Before the race, former Masters women’s champion Victoria Hood told Sky News that “the science is there and it says that it is unfair” for biological men to compete in women’s sports:

The male body, which has been through male puberty, still retains its advantage, that doesn’t go away.

I have sympathy with [transgender athletes]. They have a right to do sport but not a right to go into any category they want.

McKinnon issued a press release in a pinned tweet Saturday denouncing Hood for arguing against “the rights of transgender women to full and equal treatment under British law” – the competition was held in England – “as well as international sport” and the cycling organization that runs the Masters.

It said that Hood provided no evidence that she had ever raced McKinnon, as Hood claims, and noted that Hood was in a different age bracket than McKinnon, so the two would not have directly competed at Saturday’s championship. (Hood didn’t participate in any category.)

In a Sunday tweet after winning the race, McKinnon called women who object to competing against biological men “loser[s].”

I have yet to meet a real champion who has a problem with trans women.

If you win because bigotry got your competition banned… you're a loser.

In a pre-race interview with Sky News, McKinnon brushed off a new study that suggests testosterone blockers have “limited effect on reducing muscle strength” that is key to cycling competition.

The study by researchers at the Karolinska Institutet and the Swedish School of Sport and Health Sciences, published days before McKinnon’s victory, was not specifically about transgender athletes. Instead, it looked at the effect of “testosterone supplementation in young athletically active women” to find out what if any advantage accrues to women with “hyperandrogenism,” or naturally elevated testosterone levels.

The study found that muscle mass increased after 10 weeks of “moderately elevated testosterone concentration,” but “jump test and muscle strength were not affected.” That suggests that testosterone blockers taken by transgender athletes such as McKinnon would not reduce their biological advantage. (Research subjects were measured on treadmills and bikes.)

“All my medical records say female,” McKinnon told Sky News when asked about the study:

My doctor treats me as a female person, my racing licence says female, but people who oppose my existence still want to think of me as male.

There’s a stereotype that men are always stronger than women, so people think there is an unfair advantage. By preventing trans women from competing or requiring them to take medication, you’re denying their human rights.

The cyclist continued that there are “elite [female] cylists who are bigger than me” and that athletes “can be successful with massively different body shapes,” yet ducked the question when asked if McKinnon favored a single Olympics category for both men and women. Instead the professor said that the International Olympic Committee was unlikely to do that.

McKinnon claimed in a Monday tweet that the professor’s body has not produced testosterone “for nearly a decade.”

I'm just going to come out and say it:

My body doesn't produce testosterone anymore. And it hasn't for nearly a decade.

Draw your own conclusions.

McKinnon was previously known for celebrating the death of libertarian philanthropist David Koch because he was a “trash human.”

MORE: Harvard says masculinity and testosterone are not ‘connected’