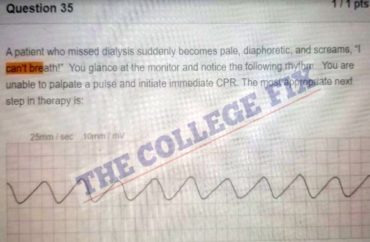 Before “I can’t breathe” became the rallying cry of the Black Lives Matter movement, the phrase was simply a direct way for patients to tell medical personnel that they couldn’t breathe.

Medical patients may want to find a new way to convey their pulmonary distress, lest they be accused of triggering someone.

The Indiana University School of Medicine apologized to students for a question on a cardiovascular exam that included the phrase “I can’t breath[e],” according to screenshots of the question (above) and message to seniors in “All Sections” (below) that were forwarded to The College Fix. The question reads:

A patient who missed dialysis suddenly becomes pale, diaphoretic, and screams, “I can’t breath!” [sic] You glance at the monitor and notice the following rhythm. You are unable to palpate a pulse and initiate immediate CPR. The most appropriate next step in therapy is: [the options for answers are not visible]

The apology message, which is undated, was written by Daniel Corson-Knowles, assistant professor of clinical emergency medicine.

“We are very sorry to have included content, specifically the words used to express difficulty breathing, within a case presented last week in the cardiovascular quiz in a context that was insensitive and upsetting due to the similarity to phrases associated with the killing of George Floyd and several other instances of police violence against black people in the U.S.,” he wrote. (The phrase took on political significance, however, because Eric Garner said it several times as New York City police pinned him down.)

Seeing the phrase in this context “resulted in a very painful trigger for many of you,” and the school “adjusted this material as soon as we learned of this oversight on Friday,” Corson-Knowles continued. (This is dubious: Robby Soave at Reason said he reviewed messages in an “online chat forum” from the class, which suggested “most students did not seem personally offended by it, but rather were worried that others were offended.”)

Corson-Knowles said the question was “written long ago and reflected phrasing” that patients might use when “experiencing cardiac or pulmonary difficulties,” but that does not excuse the school for “not catching this very phrase and removing it when preparing the quiz material.”

The professor added that the school was “in the process of reviewing practices cases for the potential presence of intrinsic bias, microaggressions and other content that can help perpetuate stereotypes and affect how students feel, learn, perceive and treat their patients and how this translates into patients’ outcomes.”

The medical student who shared the screenshots wrote in an email that the IU School of Medicine “education overall has been effective at preparing me for a career in medicine,” but this apology for a quiz question’s phrasing is among the incidents “that give me pause”:

This is the most recent and most egregious example of the PC, “trigger warning”, and “safe space” culture that has permeated my education. […] I find it unacceptable and outrageous that my institution of medical education is not only allowing the training of physicians who can be upset and destabilized by extremely common patient presentations, but is consistently encouraging and supporting such an attitude. These are future physicians who will be expected to save lives in difficult circumstances. […]

I have to say, this should be concerning for anyone who may find themselves in an emergency room in the future.

The student continued that many classmates “expressed their outrage and fear at the prospect of being required to attend their clinical rotations during the beginning of COVID-19, slandered those who protested the lockdowns, audibly defamed the president and conservatives during class time, yet still had the ability to be active participants in the round of protests in Indianapolis and on the IU campus.”

Other parts of the med school curriculum are feeding “lack of trust in healthcare professionals,” the student said, including required classes that “teach us that transgenderism is not something to question” and that “gender identity can and should be chosen by pre-K children without any sort of parental interference or input.”

UPDATE: Robby Soave at Reason said he reviewed classmates’ discussion of the quiz phrasing in an “online chat forum,” finding few “personally offended” by it. The new material has been added.