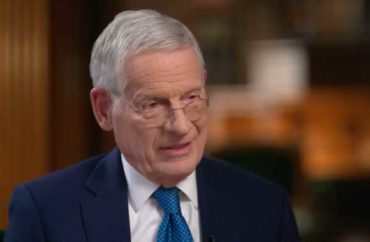 ‘Most of my colleagues…don’t think it’s a problem that Harvard is mocked by half the country,’ Harvey Mansfield said

Political philosopher Harvey Mansfield is “the most visible conservative faculty member on campus,” according to The Harvard Crimson.

Mansfield “has hardly left Harvard since his first arrival in 1949, and has been on the faculty since 1962,” according to his university biography. He earned his undergraduate and PhD degrees at Harvard and has taught political philosophy at the university for more than five decades.

“Ideological imbalance” is a “terrific issue” at Harvard and elsewhere, Mansfield said.

“It’s an issue which is not accepted as an issue by most of my colleagues and by the university, generally. They don’t think it’s a problem that Harvard is mocked by half the country for the things which it does gratuitously, to provoke them.”

A recent Crimson survey found that 80 percent of surveyed faculty “identify as liberal.” Mansfield said he doesn’t think the Faculty of Arts and Sciences has hired a conservative in the last decade.

“If you’re conservative and want to get on with your colleagues, you have to indulge in self-censorship, and I think a number of students do that as well,” he said.

Harvard could improve its viewpoint diversity if the president or dean would invite conservatives for a lecture series or give them opportunities to deliver prominent speeches such as the commencement address, he said.

“I think most people are in favor of free speech, and it isn’t free if you’ve got only one side,” he said.

Mansfield has advanced his own contrarian views on “differences between the sexes.” They are real and “they ought to be respected, and to some extent laughed about,” he said. “It’s good for men and women to tease each other. And it’s very bad for students as they do today to take offense so easily.”

Mansfield’s 2006 book “Manliness” is a “comprehensive study” of a “quality both bad and good, mostly male, often intolerant, irrational, and ambitious,” according to his publisher, Yale University Press. “Our ‘gender-neutral society’ does not like it but cannot get rid of it.”

According to Mansfield, “manly aggression is something without which we cannot have a good or stable society,” Martha Nussbaum wrote in a critical review for The New Republic.

Mansfield’s understanding of the differences between men and women, as well as many other “permanent problems,” comes in part from his reading of classic philosophical texts, which he describes as “beautiful books” because “every word in them counts.”

Books like Plato’s “Republic” and Tocqueville’s “Democracy in America” are classics because they intelligently examine perennial issues such as democracy and inequality, rather than simply “passing” problems.

They’re also valuable for their style; they exemplify “beauty of form and expression and thought.”

Even at Harvard, “the curriculum is a mess,” Mansfield told Boston Magazine. “If you look at a typical Harvard transcript, you see courses all over the place. Often on small subjects or policy questions, instead of meat and potatoes: history, economics, philosophy…it’s easy to waste your money on something that isn’t worth it.”