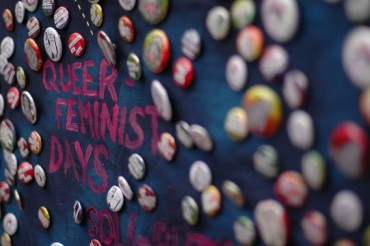 If you’ve ever wondered what goes on at freshmen orientation sessions at small liberal arts colleges, then a recent post on Reddit will give you some insights.

One of the top posts on the site’s MensRights subreddit on Sunday included a detailed account of recent get-to-know-you events at Vassar College, an elite college with 2,450 students about 75 miles north of New York City that has a reputation as a petri dish for leftist radicalism.

While Reddit is anonymous, the description offered by “BrOf1st”  is not only articulate and completely plausible, given everything we know about colleges nowadays, it also included two pictures he took from the events that bolster his claims.

Here’s a highlight reel from his post, and nothing on it will surprise you if you follow liberal campus trends:

The first day I was on campus, I had to meet with my student fellow group. We had to go around a small circle and introduce ourselves, with things such as our name, our major, and where we are from: typical things. But we were also forced to say our preferred pronouns. In fact, when any student speaker introduced themselves (or should I say “xerselves”) they said their preferred pronouns.

The next night it got worse. Once again, we had to get into a circle. We had to talk about our identities using an identity wheel and afterwards literally “check our privilege:” talk about which parts of our identity give us the most “privilege.” We then made a long walk to a larger gathering space where we were supposed to hear what it was like being part of the college. Instead, a bunch of false rape and wage statistics were yelled at us, strangely enough telling me more about the campus than any formal meeting could. …

We later had to attend the college’s version of the sexual assault presentation. … While in the last presentation, they concluded about 6% of men are rapists, this one said that was a very small number and that all men contribute to “rape culture.” We were presented with a “rape culture” pyramid which showed that things such as “jokes” and “traditional gender roles” support things high up in the pyramid, like rape and murder. (Maybe if we just close down Comedy Central we will have an end to murder) The presenter also said things such as “Asking a pregnant mother if her child is a boy or girl, is violent since we don’t yet know its gender.” Yes, violent.

OK, maybe that last bit is surprising. It’s the first time I’ve heard asking whether it’s a boy or girl is violent. Sheesh, that’s nuts, even for militant feminists.

Meanwhile, “BrOf1st” included a picture of that “Rape Culture Pyramid” to illustrate his point, as well as an alleged picture of the school’s friendly scavenger hunt, which included “smash the patriarchy” as number 23 on the list.

Perhaps all this is not surprising, given Vassar’s lengthy assortment of radical campus causes and extreme measures.

Why, you could join its Vassar Animal Rights Coalition – the proud creators of Meatless Monday, or the Fossil Fuel Divestment Campaign, which gleefully counts interrupting a 2013 lecture from a pro-fossil fuel speaker, chanting “Divest please, Vassar Trustees!” among its triumphs, The Miscellany News campus newspaper reports.

What had preceded that display, pray tell? How about this, from National Review Online:

Ripped-up lecture ads and demands that [Alex] Epstein be paid to walk away from Vassar were only the beginning. Shortly before Epstein’s lecture, a Vassar student issued a bizarre threat on his Facebook page. Lashing out at “‘Middle-class’ Industrial Capitalist A**holes” (no asterisks in the original), he threatened to walk in on Epstein’s talk and do physical damage to himself, horrifying the audience as a way of disrupting the lecture. This alarmed MICA and prompted a call to campus security, which was present at the event as a result.

Moving right along, how about Vassar’s chapter for Students for Justice in Palestine, which last May actually compared Israelis to the Nazis. Yes.

If none of those tickle your fancy, there’s always the Student/Labor Dialogue club, which champions union causes, or the Feminist Alliance, “for those interested in tackling issues of a variety of identity-based oppression,” The Miscellany News campus newspaper reports.

A recently formed Vassar Conservative Libertarian Union aims to offer a bit of a counterbalance to all this, but it faces an uphill battle.

Consider a September 2012 opinion piece by sophomore Luka Ladan in Vassar’s student paper, The Miscellany News. Ladan tells of election-year political science classes that regularly devolve into snickering sessions aimed at Mitt Romney, Paul Ryan and other Republican candidates. Professors take the lead, teaming up with liberal students to mock Republicans and anyone else who leans right. The Vassar students I’ve contacted (some afraid to speak for attribution) largely confirm this picture. Sophomore computer science major Jarret Holtz, told me, “I don’t feel that [conservative students at Vassar] are able to freely express their views at all.”

Which brings us back to our man “BrOf1st.” He’s just getting started in this mess. He explains how he landed at Vassar:

Before going to my college of choice, I knew it was a place full of [Social Justice Warriors]. However, it was the best college I had gotten into, and I wasn’t going to worsen my education do to opposing politics. I also figured that as long as I avoid the ethnic/women’s studies departments I would be avoid the SJW stuff. I was wrong.

A price far, far too high.