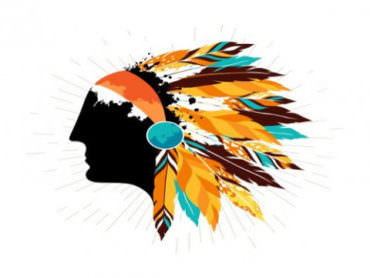 There’s a big rock at Michigan State University appropriately called (get this) “The Rock,” the purpose of which “is to serve as a platform for some cause” … as long as someone is willing to stand “guard” over it for one day’s time.

In the Native American Law Students Association’s case, the cause is to educate everyone about how offensive the term “redskin(s)” is, as well as Native images used by sports teams.

The group is lobbying for Michigan Senate Bill 487 which would outlaw use of “Redskins” by the state’s public schools. According to The State News, five high schools in Michigan still use the nickname and mascot.

NALSA member Emmy Scott said “the term and usage of Native Americans as mascots can impact indigenous children’s self-esteem” if they attend schools “where they are portrayed in a stereotypical and inaccurate light”: 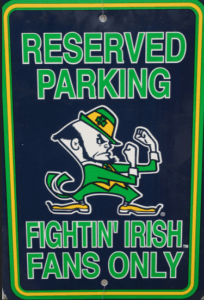 “The imagery and the mascots, they’re so ingrained in the American psyche that people don’t see it as something that’s wrong, whereas if you used any other race in the place of that, people would automatically say, ‘Well, that’s wrong, that’s racist.’ But when it comes to Native Americans, we’ve been used that way for so long that people just take it for granted that that’s the way that it’s supposed to be.”

I wonder what Notre Dame fans think of that statement (see left).

MSU law student Clarissa Grimes, who’s not a NALSA member, was at The Rock demonstration and added “Even if you aren’t indigenous yourself, how we treat indigenous peoples has an effect on us as well. So it’s important for everybody in our country, not just people who are directly impacted by these issues.”

As Thomas Sowell would say, what we have here is yet another “vision of the anointed” — self-proclaimed spokespeople who have taken it upon themselves to “represent” everyone in a particular group.

As was recently pointed out by The College Fix in response to a private elementary school’s ban on any Washington Redskins clothing, nine out of ten Native Americans do not object to the term “redskins.”

Nine out of ten. And this is a figure unchanged for the last 13 years.

The results of the poll, from May of last year, were used by Washington Redskins owner Daniel Snyder as evidence against those — including former President Obama — who sought a name change for the nation’s capital’s football team.

Barbara Bruce of North Dakota said “I’m proud of being Native American and of the Redskins. I’m not ashamed of that at all. I like that name.”

A teacher for four decades, Bruce said she and many others “embrace native imagery in sports because it offers them some measure of attention in a society where they are seldom represented.” According to the poll, a mere 8 percent say such images are offensive.

The poll’s results were consistent across every Native American demographic group, according to The Washington Post.

So, who would you believe? The vast majority of Native Americans in the country … or politically correct outfits like the MSU Native American Law Students Association and Green Acres (Elementary) School?