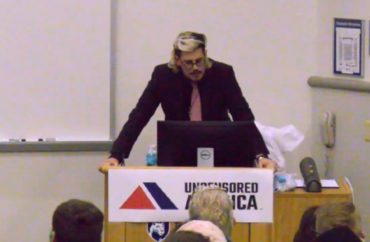 Milo Yiannopoulos, a former Breitbart News editor and provocateur returned to campus speaking with a speech at Penn State on November 3.

In the four years since he last spoke on campus, Yiannopoulos has left his male partner and said he had had a reversion to his Catholic faith. A New York University professor invited him to speak in 2018 but the event never occurred after intervention from Mayor Bill de Blasio. The last time he spoke on campus appears to have been a brief appearance at the University of California Berkeley in September 2017.

But his reversion and November 3 speech, called “Pray the Gay Away” has caused as many problems as when he would speak on campuses before. It attracted about 250 attendees according to the Morning Call and the university paid him just under $18,000 for the event.

Protests and criticism of the event led university officials to release a statement on the event.

“As a public university, we are fundamentally and unalterably obligated under the U.S. Constitution’s First Amendment to protect various expressive rights,” the university said in a statement published by the Daily Collegian. “Even for those whose viewpoints offend our basic institutional values,” the statement from General Counsel Steve Dunham, student affairs vice president Damon Sims and Vice Provost for Educational Equity Marcus Whitehurst said.

The public university’s leadership told students to, “take action through inaction” and to turn their backs against “hatemongers.”

“Unify as an empathetic, compassionate and thoughtful university community that stands as one, purposeful in its commitment to diversity, equity and inclusion, and in its determination to silence hate mongers by turning our backs on them and denying the attention they seek,” the trio wrote.

Milo did not provide comments to The Fix after initially responding to an inquiry.

SASV announced on Twitter that they planned to hold a protest during Milo’s event. “IT IS RIGHT,” said the SASV via email in all-caps to The Fix, “TO REBEL AGAINST BIGOTS AND THEIR SUPPORTERS LIKE THE PSU ADMIN!”

The campus Gender Equity Center held a “Love is Louder” event simultaneously with the “Pray the Gay Away” speech.

The questions on their survey included, “How did you feel when you found out that MILO is coming to Penn State?” and “Is there anything the UPUA can do to make you feel safer?”

Many posters of the Milo event have been ripped apart according to comments from Uncensored America via email to The Fix. “The founder of the organization who invited Milo [Uncensored America] has been targeted and doxxed multiple times.”

The group said it wants to see more “open conversation.” The email from the UA said:

The reaction to our event – with many demanding Penn State cancels it just because they don’t like Milo – proves we don’t live in an environment where people can truly speak freely. We don’t live in a country where we can have an open conversation without fear of intimidation or censorship. We cannot grow and live in a better nation if we aren’t willing to discuss any issue from all sides.

While some at Penn State do not like him, Milo has a friend in an unlikely place — liberal University of Chicago on the South Side of the city.

Professor Rachel Brown said she is glad to see her friend Milo back on campus.

“There are differences of opinion on serious, moral and ethical choices that people are making,” Brown said in a phone interview with The Fix. “We need to be able to talk about them on campus and in the public sphere and to do so prayerfully and respectfully rather than shouting each other down.”

Brown was happy that Milo was speaking on campus again and that students were asking him to speak.

The professor provided some insight into her friend’s reversion to the Catholic faith, sharing that the pair attended a Latin Mass, an older form of the Catholic liturgy, at St. John Cantius in Chicago.

“He has now done a full confession and is received back into communion,” says Brown, “He really wants to help people who are like him wanting to return to God.”

“There are people who are in the homosexual lifestyle who were abused as children or young teenagers as Milo was who would prefer not to be a part of that community,” Brown told The College Fix. “Milo is speaking to them.”

“He will continue to speak in so far as there are students who would like to invite him to speak,” Brown said.

“We’ll see whether we are able to have these conversations on campus again,” Brown said. She called it a “big moment.”

Editor’s note: The article has been updated to remove a misattributed quote and to correct when SASV emailed The College Fix.