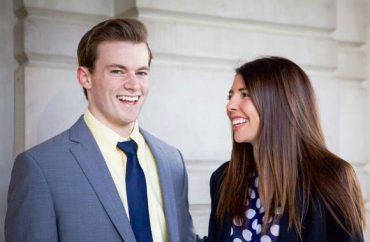 ‘Is it just a bunch of Snow Tigers together?’

Their slates were both socially progressive and their campaign promises substantially similar.

But because the winning candidates in the University of Missouri’s student government elections were white – and one of them, male – the results prove the underlying racism and sexism of the student body, according to critics.

President-elect Nathan Willett and his female running mate, Payton Englert, were nearly disqualified from the two-horse race hours before their victory, based on an anonymous allegation of ballot fraud.

The Board of Elections Commissioners issued its harshest possible sanction against their slate before a student judicial body overturned its ruling at a raucous Wednesday night student government meeting.

With the votes tallied, the Willett/Englert ticket won in a landslide, 54-46 percent, in the largest turnout ever for a Missouri Students Association (MSA) election.

A woman should be at the top of the ticket

The race pit Greek life against racial minorities and feminists in the view of the competing slate, current MSA Vice President Tori Schafer and self-published author and motivational speaker Riley de Leon, who is male.

They were endorsed by the student newspaper The Maneater and the Legion of Black Collegians, despite both slates favoring more diversity programming.

Schafer cast herself during the first MSA debate as a militant feminist systematically excluded from leadership by male MSA leaders. Moderators also asked Willett and Englert why he was the one running for president and not her, in contrast to the Schafer/de Leon slate.

One of the more substantial policy differences: Willett and Englert have been critical of the national It’s On Us program, a sexual-assault awareness program championed by Schafer and de Leon.

Tori has done a great job working for It's On Us, but we think it takes more than writing 3 words on your hand and taking a photo.

In a statement issued around noon Wednesday while students were still voting, the board said it “expulled [sic]” Willett/Englert because an anonymous allegation accused the slate of “obstructing the fair election process.”

But it left their names on the ballot and let them continue campaigning because the slate immediately appealed to the Student Court.

The statement was a bombshell that sent the Willett/Englert campaign scrambling to save its reputation in the final hours of its weekslong campaign.

The candidates called the accusations “[b]aseless attempts to disrupt the legitimacy of the MSA election process” and said the board failed its statutory obligation to “establish the authenticity of the allegations levied.”

The Willett/Englert campaign did not immediately respond to an email Wednesday night asking when it was informed of the allegations.

Attached is a press release from the Tigers Together team regarding campaign infraction allegations. pic.twitter.com/koZ67Agvmr

The board told The College Fix in an email Wednesday that both slates “remained on the ballot throughout the entire election,” although a Willett/Englert supporter at Wednesday’s MSA Student Senate meeting claimed students were left uncertain whether their votes would count.

Angry Willett/Englert supporters packed the meeting and fumed about the ambiguity of the charges against the slate. They suggested high-level machination and personal politicking was at play.

“Personally I think there is a lot of corruption that happens in MSA,” said Willett/Englert Co-Campaign Manager Leslie Parker, speaking of the “whirlwind” of events Wednesday. “I served at every level [of MSA], and if anyone knows that, it’s me.”

Even as Grace Bommel, vice chairwoman of the board, said the decision to “expel” the slate was “one of the hardest decisions I’ve had to make,” she declined to detail any specific allegation.

While the Student Court was convening privately to consider the appeal – which held up the release of the vote tally – Senate Speaker Mark McDaniel said the Senate had not been briefed on the allegations, either.

‘The white elite came out deep’ – and possible impeachment

As the meeting continued, supporters of Schafer/de Leon portrayed the other slate as riding a tide of white votes.

“I think it’s pretty clear” that the Interfraternity Council and Panhellenic Association gave Willett/Englert its full support, said Jack Miller, a social media coordinator for the MU LGBTQ Resource Center. “I think we can all agree [those] are predominantly white institutions.”

That is “absurd,” retorted Willett/Englert staffer Anjay Patel, who is Indian.

An unidentified student defended Miller. “I just really want to figure out what everyone’s definition of ‘together’ is,” she said, referring to the Willett/Englert “Tigers Together” slogan. “Is it just a bunch of Snow Tigers together, or is it actually all the Tigers together?”

Mizzou Young Americans for Liberty Treasurer Chris Lonsdale was escorted out of the meeting as he was speaking. He was holding a cardboard sign that read “Tori & Riley Rigging Elections Like Hillary.” (Personal attacks violate Senate decorum, Speaker McDaniel repeatedly warned the room.)

When you try to slam the opposing slate at the @MSAmizzou open forum but hold your sign upside down pic.twitter.com/wjkaHv0iFA

Speaking last before quorum was called, de Leon said his campaign was not behind the complaint to the board and that he hoped the “animosity of this campaign cycle doesn’t become routine.”

An hour after the scheduled release, the Student Court overruled the board and Willett/Englert officially won, 4,637 to 3,911.

The Court has overturned the decision made by the BEC.

PRESIDENTIAL ANNOUNCEMENT AT TRADITIONS PLAZA AT 9:30

Once again: THANKS TO ALL WHO VOTED! pic.twitter.com/Ly8WnvD1y6

The tally prompted immediate pointed accusations of racism and sexism from the losing side. One student said the election proved “marginalized identities” don’t matter on campus, while another credited “the white elite” who “came out deep.”

I'm waiting for the day when the voices of marginalized identities matter on this campus. #snowtigerstogether

And this was the largest turn out in MSA history? The white elite aka greektown came out deep. I'm just…ugh.

America & Mizzou has shown me I no longer need qualifications. I am appointing myself as chancellor. 1st rule: Class is cancelled tomorrow.

An inauguration date has not been set, according to The Maneater, but the incoming leaders might not have a peaceful transition.

Before the meeting, two senators who supported the losing ticket “talked about pursuing impeachment” against Tigers Together if it won narrowly, an observer of the conversation told The Fix.

“[T]hese senators are supposed to be representatives of the students, yet they’re willing to go against the will of the students in order to basically engage in party politics,” the observer said, declining to “name names because I can’t confirm how serious they were … It just felt wrong that they were talking about it the way they did.”