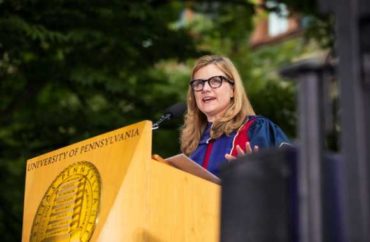 ‘The charges against them are incorrect,’ faculty wrote

Seventy-three University of Pennsylvania professors signed a letter opposing the university’s disciplining of students who disrupted its back-to-school Convocation in August, The Daily Pennsylvanian reported Monday.

Students, alongside local residents, were protesting a local property owner’s eviction of residents from local low-income housing and demanding that the university “get involved” to help the residents stay, The College Fix reported on September 1.

“Upset about the looming eviction of residents in a nearby affordable housing complex, protesters descended on..convocation at the University of Pennsylvania, interrupting President Liz Magill and accusing Penn of gentrifying neighborhoods near campus—or ‘Penntrification,’ as they called it,” Inside Higher Ed reported on September 1.

Penn does not own the nearby University City Townhomes complex that was the focus of the protest, Inside Higher Ed reported.

However, the student activists believed the university should step to stop the eviction given how the school’s presence has contributed to gentrification, according to The Philadelphia Inquirer.

A post shared by Coalition to Save the UC Townhomes (@saveuctownhomes)

Letter from faculty asserted students’ right to protest without censure

“We, the undersigned faculty, are deeply concerned about the efforts of the Center for Community Standards and Accountability to deny or curtail the rights of Penn students to articulate their opinions as part of public protests on campus,” the faculty members wrote in the letter.

“In this instance, two students have been issued notices stating that they have been in ‘violation of the University’s Guidelines on Open Expression … and Code of Student Conduct,’ ostensibly because they had protested at the 2022 Penn Convocation on College Green,” the authors wrote. “The charges against them are incorrect, in fact, as can be demonstrated even by a casual review of video shot during that protest.”

The professors alleged in the letter that Penn had violated its own Guidelines on Open Expression, which outline the University’s policy on student protests.

The students “had told The Daily Pennsylvanian on Sept. 21 that the University is targeting them to stifle protest against the sale of the UC Townhomes, an affordable housing complex located at 39th and Market streets,” according to the college paper.

One signee, Germanic languages and literatures Professor Simon Richter, who has himself protested university policies, spoke to the paper in support of the students.

“I thought it was really important to make the administration aware that faculty knew these students, cared about these students, supported their protest, and that we were watching,” he said.

Other professors echoed his concerns.

“Many faculty members consider themselves to have an essential role in the conversation between students and the University,” The Daily Pennsylvanian reported. “They highlighted student organizers as a source of motivation to take action on social issues adjacent to campus, including the sale of the UC Townhomes.”