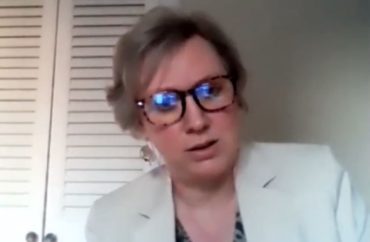 A talk given by a U.S. Naval War College professor on racial and gender issues argued that white privilege is akin to getting free Wi-Fi, an analogy that has drawn scrutiny in center-right circles this week.

Professor Pauline Shanks Kaurin argued in her talk that, hypothetically, while white people enjoy the perks of free Wi-Fi people of color pay double for it.

She brought up the analogy at least three times in her one-hour online talk plus Q&A session for the Naval War College’s “Issues in National Security” lecture series.

While her talk was given in March, her arguments drew scrutiny this week after a video snippet of her comments was posted on Twitter and then linked on Citizen Free Press, a conservative successor of the Drudge Report.

Shanks Kaurin, a professor in the College of Leadership and Ethics, began her talk by citing the issues she aimed to address, including racism, sexism, privilege, white supremacy, patriarchy, anti-racism and critical race theory.

“Systemic and structural disadvantages in racial and gender categories … are intentional and historical,” she said. “One does not accidentally enslave millions of people. That’s not an accident, that’s intentional. You have to set out to do that.”

Systemic and structural disadvantages “are imposed by one group and disadvantage other groups,” she said, and then presented her Wi-Fi analogy, saying:

Later, when asked about the complication of mixed-raced people, she used the example again, but first noted that “both race and gender are social constructions.”

Shanks Kaurin then said that “I think for a lot of people it is about not wanting to acknowledge that … you have free Wi-Fi and someone else is paying twice.”

“Or not even being willing to acknowledge that I have free Wi-Fi: ‘Well, that’s just the way it is, like, everyone has free Wi-Fi, right?’ Well, no.”

“So then what happens when you start to learn about these strategic disadvantages, it’s easier to say, ‘Well, they didn’t work hard enough, or their parents didn’t save.’ We go only the personal responsibility route because that feels more comfortable,” she said.

Asked about white males who today experience “reverse discrimination,” she brought up free Wi-Fi again in her reply that also noted reverse discrimination is not a viable argument since it’s not systemic in nature as opposed to women and African Americans who could not own property for generations and lost out on “intergenerational wealth.”

As for white males who complain “you are discriminating against me because I haven’t had to pay for Wi-Fi … the questions is, ‘What would be equitable?’ Everyone gets free Wi-Fi? Well, that’s not economically sustainable,” she said.

“Other people have been subsidizing free Wi-Fi — should they get their money back because they’ve had to pay twice as much?”

Shanks Kaurin often cited the word “equity” as she framed her arguments.

“You can’t just start where we are and say, ‘Well forget about the past, that was then, this is now, and even though you’re six laps behind we are just going to start here and run the race,” she said. “I think we can see the problem with that.”

Ideas such as reparations and affirmative action may be some ways to even the playing field, she said.

Asked about the lecture, Commander Gary Ross, a spokesman for the U.S. Naval War College, told The College Fix via email on Tuesday that the “views presented by the faculty do not reflect official positions of the Naval War College, DON or DOD.”

Shanks Kaurin, in an email to The Fix on Tuesday, said she was presenting ideas to think about, per the request of her employer, and not necessarily presenting her official scholarly views on the topics during the online speech.

“The context is that I am an academic ethicist asked by my institution to speak on an issue of concern for a series for the Spouses of our student body,” she said via email. “I am an educator and the talk represents some current views, questions and approaches on the topic.”

“The talk was designed to be accessible to a broad audience and to ask people to think and reflect. I also attempted to provide some balance and nuance to the topic,” she said.

“I would point out much of this material is not new in academic circles, though it is new and upsetting to some in the broader culture. I understand that people disagree with my views, as is their right. My personal academic views are represented in my published scholarship and there alone.”