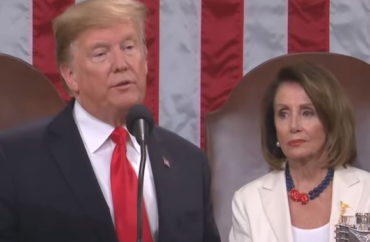 Scholars leading college classrooms across the country are about six times more likely to criticize Republican President Donald Trump than Democratic Speaker of the House Nancy Pelosi, according to the results of a new College Fix poll.

One thousand college students were asked in the recent online survey: “Over the last semester, have any of your professors or teaching assistants made negative comments about the following people or groups?”

The students were also asked about Republicans and Democrats.

The student poll was conducted between May 1 and May 4 exclusively for The College Fix by College Pulse, an online survey and analytics company focused on college students.

In the comments section of the survey, where students have the option to weigh in on the poll question, a variety of responses was fielded.

When asked about criticisms of President Trump, students noted:

Arizona State: I know right? Such blatant partisan politics in the classroom

UMKC: I don’t think I’ve had a professor who hasn’t.

UMKC: Yeah, I started a counter of how many days I could go without one mentioning Trump…I didn’t get too far

Clemson: As someone from a “conservative” school I hear something about Trump at least every week so I can’t believe most people never hear professors talk trash about them.

Notre Dame: You bet. I actually had one philo prof who (believe it or not) managed to never mention her own political beliefs in class.

WIU: I’m a Comm major, the elections and what’s going on with government communication methods is a big part of working real-world examples into our discussions and assignments. Plus, DT uses so many deception and unethical compliance-gaining techniques that it’s hard not to mention him in persuasion class.

South Carolina: Higher up engineering professors care more about not teaching you than politics.

Ohio State: Add math and physics into that list

University of Wisconsin-Madison: 40% of y’all are lying

CU Boulder: No but I also mute my lectures

UTK: Let’s just say in wildlife sciences and EEB, he is not popular

Cornell: Only in my history lectures

Students were also given the opportunity to comment on how and when Speaker of the House Pelosi was criticized by scholars during the spring semester. Few did so except to say “I’ve never heard anyone criticize her” or “no professor would ever criticize a dem like that.”

The margin of error for this survey is 3.5 percent.

POLL: 73 percent of Republican students have withheld political views in class for fear their grades would suffer

POLL: Many Democratic and Republican college students think of each other as ‘evil’