No carte blanche to ignore relevant questions for accuser

A third of its law school faculty – the “permanent” professors, not adjuncts or visiting – has gone to court to force the school to follow its own Title IX rules.

Twenty-three professors including Legal Insurrection founder William Jacobson asked New York State’s intermediary appeals court to let them file a brief to explain the importance of Cornell being held accountable for how it applies its written policies.

The March 25 brief was filed by Prof. Sheri Lynn Johnson, and it has a single purpose: to call out Cornell for depriving an accused student his Cornell-granted right “to test his accuser’s account of events and credibility by having a disciplinary hearing panel ask his accuser proper questions that he proposes. … This right was not honored here.”

Johnson’s brief says the professors have a “keen interest in the fairness and accuracy of Cornell University’s disciplinary proceedings,” and their wide expertise is “directly applicable” to college sexual-misconduct proceedings at both Cornell and colleges generally:

Our study, scholarship, teaching, and practice enable us to offer this Court with useful insight into these broader concerns. We identify law and arguments that might otherwise escape the Court’s consideration and can otherwise be of assistance to this Court. …

We encourage this Court to continue to serve as an effective check on colleges and universities, which have been vested with authority to inflict life-altering punishment in this controversial area.

Johnson notes that her experience in criminal procedure has “parallels” to campus sexual-misconduct proceedings, whose consequences include “expulsion or suspension and a life-altering transcript notation” and yet may deprive accused students of cross-examination, as happened in this “John Doe” case.

The professors (below) are concerned that if Cornell is allowed to ignore its own procedures in this case, it will continue to do so in future Title IX cases, as will other colleges who see there are no consequences to flouting their explicit promises to students.

In a footnote, they point out that Cornell “has been the subject of more Title IX-related investigations … than any other college or university nationwide, and it has been sued with some frequency as a result of its conduct in Title IX matters.”

They also question the federal government’s “mandates to universities and colleges in Title IX matters, as well as their implementation in this and other cases.” 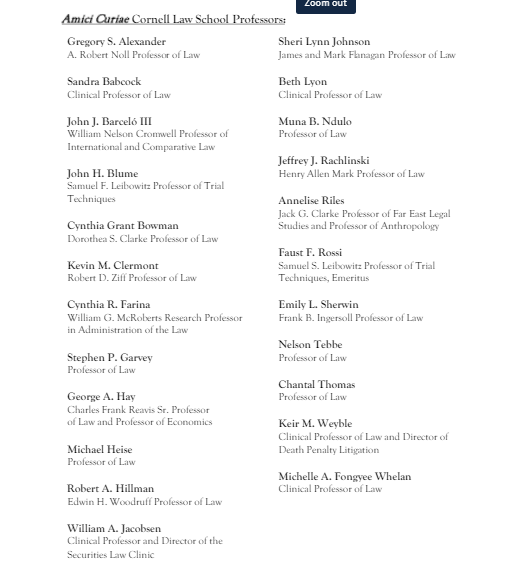 The brief recount various witness statements that portray the accuser as verbally suggesting she wanted to sleep with someone at the fraternity party because of a recent breakup.

The accuser made a “number of materially inconsistent statements” about that party, including contrasting accounts of how much she drank. This is relevant because she claimed she was in the “death range” of intoxication during her sex with the accused student, yet she said she was “coherent” enough to send a “joke text message” to her mother.

The accused student was not allowed to even indirectly ask any on-point questions about the accuser’s inconsistent statements, yet the trial court bizarrely said Cornell had “substantially complied” with its own procedures.

The professors reminded the appeals court that both it and many other courts have upheld the rights of accused students to “present questions” to be asked of the accuser “where a material factual conflict exists”:

Accordingly, our point is not that Cornell should have given Doe the right to full cross-examination that he would be entitled in a criminal proceeding. Rather,we stress that the alternative to traditional cross-examination that Cornell’s procedures promised to Doe was crucial, and that the procedures he was promised should be interpreted in light of both the importance of those procedures to the accurate determination of the facts and also the public discussion and debate that was occurring when those procedures were adopted.

The New York appeals court even forced a private New York college to re-admit an expelled student because it refused to follow its own Title IX policy, the professors reminded it.

They argued that the trial court wrongly granted Cornell’s officials the right to arbitrarily reject “proper” questions posed by the accused student to the accuser, when in fact Cornell’s policies explicitly require officials to ask all proper and relevant questions “at the disciplinary hearing”:

Application of the [trial court’s] reasoning would enable Cornell hearing panels to disregard students’ properly proposed inquiry in future Title IX disciplinary hearings, either by relying on their general discretion over requested questions and topics or by considering the pre-hearing investigative record as a sufficient substitute for inquiry at the hearing. This would leave students in Cornell Title IX matters with no right to test the credibility of their accusers at a hearing and would render the “all questions” requirement in the policy a dead letter. Permitting students to only request questioning or propose topics for inquiry is meaningless unless there is a corresponding obligation on the part of the hearing panel to conduct the requested inquiry in some form during the hearing as to proper topics.