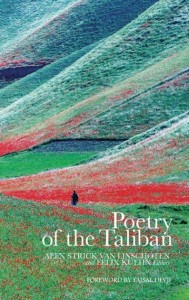 The Taliban, and other Islamic terrorists, are widely criticized – even across party lines in the United States – for fostering a culture of hatred. Their children are taught racism, their policies are misogynistic and intolerant, their leaders promote violence, and their suicide bombers are glorified.

But let it not be said that we can’t celebrate the high quality culture the Taliban brings to the world – their humanity, their thoughtfulness. And who better to bring this to our attention than the beacons of tolerance over at the Huffington Post, who are introducing us to The Poetry of the Taliban, published, not surprisingly, by the reliably leftist Columbia University Press in July 2012.

This volume, according to HuffPo, exposes us to the “delicate feelings of humanity” expressed in poetry written by members of the Taliban both leading up to and following the worst terror attack in U.S. history, September 11.

Faisal Devji, a historian who wrote the book’s introduction, also wrote the article for HuffPo explaining that while the Taliban is known for their “strict conservatism” (you know, like honor-killing your daughter for talking to a boy), their poetry is “replete with…fine emotions.”

Here’s a sample from this illustrious volume, a poem entitled “Homeland,” written by one Shin Gul Aajiz:

It’s a veritable modern day Shakespeare! Tennyson! Emily Dickinson! Well, not Dickinson, because women of course can’t write or even read, but you get the point.

Then again, if you are a member of the Taliban and you don’t know who has “plotted against” freedom, you should start by looking in the mirror. (If you aren’t too busy with that blood streaming from the heart thing, that is.)

The book is full of literary gems. There is poetry about nature, and love (you know, like beating your older less attractive wife because no longer pleases you like your new 14-year-old wife can). The West has much to learn, obviously, from what Devji depicts as the “simple humanity of rural Afghans, nourished by the loveliness of their mountains, meadows and streams…under attack by coalition forces with their drones, air strikes and heavily armed soldiers.”

Yes, Afghans are suffering, but it’s not because the Taliban stones women to death on the street for getting raped, or attempts to assassinate little girls for going to school—if you believe people like Devji—but rather because of the hypocritical, human-rights violating, money-grubbing, imperialist West with their drones and soldiers. After all, we destroyed their nature – and their rock caves where they stash their explosives to blow up American men, women, and children. Pretty cheeky of us, no doubt.

Devji acknowledges that when this sort of poetry is discovered, it is often dismissed as propaganda – but he obviously believes we ought to examine these demonstrations of enlightened humanitarian thought and appreciate the artistic capabilities of the Taliban. According to such logic, even Hitler painted some lovely landscapes that we should all appreciate.

Devji argues that while Afghanistan rebuilds its society from our destructive and purposeless war, we ought to encourage this refined side of the terrorists. He correctly points out “it was often humanitarian considerations that gave Europe’s colonial empires their legitimacy in the past.” There’s a glaring problem with that comparison, of course, because despite the efforts to spin it that way, the United States has not been empire-building in Afghanistan – the U.S. hasn’t enlarged its territory by one inch.

Devji’s apparent inability to recognize the horrors of the Taliban is demonstrated by his reluctance to call them what they are. (Repeat after me: terrorists). His error is compounded by his bizarre fascination with their “literary gifts.”

Yes, the poetry does demonstrate that they have human emotions, but of course they do – you have to get pretty angry to murder your own daughter, for instance – and that’s an emotion, right? What Devji doesn’t seem to realize is that emotion doesn’t automatically translate into any sort of literary value; all that glitters is not gold.

Nor is it appropriate to glorify art in a manner that is blind to the moral depravity of the culture that produced it.

But who am I to judge? Put down that Jane Austen and don’t waste your time with Lewis Carroll. Throw off your Western-centric literary biases, and embrace the beauty of this sensitive culture – that wants, simply, to destroy yours.

Fix Contributor Emily Schrader graduated from the University of Southern California in 2011. She currently attends graduate school at Tel Aviv University in Israel.