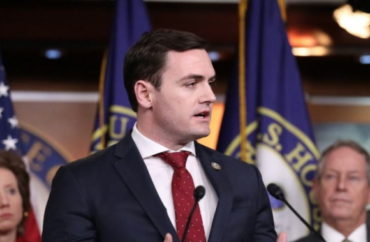 Calling higher education one of the battlefields of the “new cold war,” Republican Congressman Mike Gallagher on Tuesday introduced a five-part plan to reduce Chinese influence on college campuses.

“The situation is unsustainable—a great nation such as ours cannot continue to be held hostage by our greatest adversary,” the Wisconsin Republican said in testimony to the Wisconsin Senate Committee on Universities and Technical Colleges.

While his comments were directed to Wisconsin higher education officials, Gallagher argued they are steps all American universities can take to protect American interests.

Gallagher, a Marine Corps veteran first elected in 2016, suggested lawmakers should end universities’ reliance on Chinese funding, arguing that too many decisions on campus are being influenced by foreign governments.

“When the Chinese Communist Party really wants to kill a policy proposal in D.C., rather than acting through its embassy, which has a branding problem, it will mobilize proxies that have vested financial interests in a given outcome,” he said.

“Financial dependencies give the CCP leverage over American entities and inevitably lead to lobbying campaigns designed to blunt get-tough-on-China policies.”

He noted the prevalence of Confucius Institutes on U.S. college campuses, which critics have said stifle the free speech of students critical of the CCP.

“At the federal level we have taken bipartisan steps to ban Confucius Institutes,” he said. “But some universities are simply re-naming their Confucius Institutes to get around federal restrictions. Universities also receive communist cash through a wide range of vehicles, including gifts and contracts and support for centers in China.”

Once numbering over 100, there are fewer than 25 Confucius Institutes left on U.S. college campuses. In March 2020, Sen. Chuck Grassley (R-Iowa) sent a letter to universities hosting Confucius Institutes, warning them that such departments were “fronts for Chinese propaganda.”

Gallagher, who attended Princeton and Georgetown universities, also noted the U.S. Department of Education had uncovered billions of dollars in unreported funds collected by American universities from foreign sources.

“Until American universities end these dependencies, they will feel compelled to stay within the CCP’s good graces, censoring speech and allowing their students to become targets for United Front Work,” Gallagher said.

He noted he had previously authored the “PLA Visa Security Act,” which he said would prohibit individuals employed or sponsored by Chinese military institutions from receiving F or J visas to study in the U.S. Two years ago, the Trump administration effectively implemented this policy via executive order, and the Biden Administration has yet to revoke the order.

Saying schools must “exercise more ownership over who they allow to conduct sensitive national security-related research on their campuses,” Gallagher said universities should not allow anyone affiliated with the Chinese entities on a number of U.S. government “blacklists” to conduct research at their universities.

“Public universities must also end collaborative research in China or with Chinese research institutions because of Chinese law, which means that any technology or research conducted in China or with Chinese entities could at any time be used to advance the malign interests of the CCP,” he said. “Those interests include retaining Party control at all costs, undermining American leadership, and committing genocide.”

In order to defund the Chinese-led genocide against Muslim Uighurs, Gallagher urged colleges to divest their funds from companies associated with the CCP.

“The only way to stop this insanity is to prohibit American college endowments and state and local pension funds from investing in Chinese companies (along with indices like MSCI that have been corrupted by the Chinese Communist Party),” he said.

He also noted he would be introducing legislation to require divestment of college funds from Chinese-based companies, saying “tax-exempt American entities as well as those that receive money from the U.S. federal government should not be profiting off genocide and anti-American propaganda.”

Additionally, Gallagher argued the U.S. should invest more heavily in technology to defeat the threat Chinese-based technology poses, and American universities should focus more on giving students a broader international education in order to better understand the threats offered by the nation’s foreign adversaries.