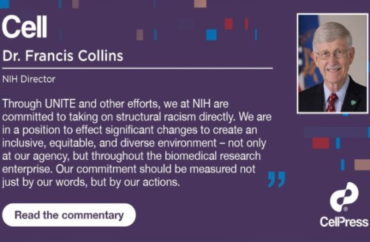 The National Institutes of Health recently announced a new requirement for participating in its NIH-wide BRAIN initiative: diversity.

The BRAIN initiative in an ongoing effort that joins scientists from various fields to work together to find treatments for neurological and psychiatric disorders such as Alzheimer’s and Parkinson’s disease as well as autism, epilepsy, schizophrenia, depression, and traumatic brain injury, according to the NIH website.

“Also, in keeping with our pledge to be transparent and accountable, the NIH Office of Extramural Research recently released an updated NIH Databook that reports, for the first time, grantee demographics by race/ethnicity,” Collins added.

She first points out that “NIH is determining research priorities to maximize the number of black grant recipients” — which does not bode well considering that in 2019, only “20 blacks nationwide received a doctorate in a neuroscience field — 1.9% of all such degrees awarded in the neurosciences.”

But the problem runs deeper than that, Mac Donald adds:

Science isn’t a social-justice endeavor, despite NIH’s determination to “provide full opportunity and participation to individuals and groups underrepresented in neuroscience.” Those groups are underrepresented for reasons unrelated to discrimination by the academy. Science has one purpose: to advance knowledge about the fundamental workings of nature. Any agenda that imposes extraneous criteria will reduce the quality of the talent pool and divert attention away from the generation of new knowledge. China imposes no such deadweight on its cutthroat race for scientific dominance.

The diversity agenda subverts science in a more fundamental way. The standard argument for what is called “inclusive excellence” is that being black or female affects how one analyzes scientific problems. Skin color even influences the perception of scientific merit. The NIH intends to put more blacks on grant-review panels to increase the number of blacks getting grants.

But science is a universal language, one that unites its participants in a discourse of reason, transcending the particularities of today’s grievance-inspired identity categories. That universality is science’s beauty and its strength. NIH’s diversity obsession, now pervasive throughout the federal science bureaucracies and in academic STEM departments, is a betrayal of the Enlightenment ideals that have alleviated so much human suffering.

Read the entire column in The Wall Street Journal.

MORE: UCLA LGBTQ+ students use their identities to ‘challenge conventional science and views’