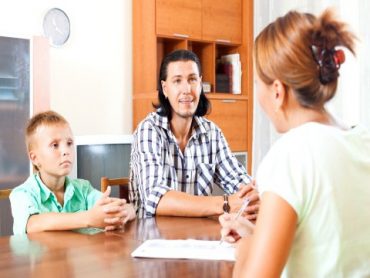 The first approaching school year in over 25 years finds me uncharacteristically without the early-August “impending return” jitters. That’s because … I called it a career last year! It’s a weird feeling, to be sure, and I must admit it’s somewhat amusing to see my former colleagues — and wife — suffering the “new school year doldrums” that every teacher goes through around this time of the summer.

The one thing my high school-teaching spouse so envies about my retirement is that I won’t again have to endure the psychological dread of a teacher complaint. The wife and I are pretty sensitive people; we wear our emotions on our sleeve. Even when we get (got, in my case) a fairly innocuous email or phone message from a parent, we’d worry about something wrong we might have done. Most often, our concern was for naught. But, every now and then, our anxiety would be confirmed.

If there’s one thing that really bugs teachers when it comes to parent-teacher communications, it’s that parents often automatically believe their child about something related to the classroom or course … without discussing the issue with the teacher. Please, parents — please — contact your child’s teacher and make your own (polite) inquiry. Most of the time, the issue is merely a misunderstanding or miscommunication.

Don’t: Say “My child never lies.” Yes, he/she does. It’s what kids do. Some more than others. Adults lie, for Heaven’s sake. Considering your child’s word sacrosanct, especially if he/she has a history of dubious classroom practices, will accomplish little-to-nothing.

I recall one time before a quiz, I noticed that a girl had written the soon-to-be-assessed verb forms on her hand. I informed her that if she immediately went to the restroom and washed everything off, all would be good — no academic penalty. This was a student whose mother emailed me almost daily for updates about her progress/performance. When I informed mom of the incident later that day — including the lack of any penalty — mom became irate, saying my accusation was out of line. She also was upset that I had “embarrassed” her daughter by making her leave the room to clean off her hands (even though hardly anyone noticed as there was plenty of pre-quiz student chit chat going on).

The following day mom emailed to tell me that the writing on her daughter’s hand was “a game she was playing with another student in band,” the previous class. When I asked what sort of game would had the precise terms that would be on my quiz, mom did not answer, merely saying she “believed [her] daughter.”

Don’t: Contact administration before talking with the teacher. That is, unless it pertains to something very egregious. Teachers do not like having a principal or vice-principal coming up to them and saying “I just got a phone call from Mrs. ______. She says (fill in the blank)” — especially if it’s a minor behavior or academic issue. Maybe parents think this will somehow result in the teacher automatically being disciplined because the principal was contacted first … ? It won’t. In my experience all it ends up doing is having the administrator relay the parents’ message to the teacher, who it turn then contacts the parents. Administration — unnecessarily — becomes a middle man. Worse, principals might end up serving as couriers, sending messages back and forth because the parents simply do not want to interact directly with the teacher. As you might expect, this usually results in a bit of resentment on the teacher’s part.

Again, unless the matter at hand is something like verbal or physical abuse, or a flagrantly unfair grading situation, go to the teacher first to confer. If you’re unsatisfied with the result, then go to a principal. The vast majority of the time a meeting with the teacher will resolve the issue. If at fault, a good teacher will apologize and rectify the problem.

MORE: Trend: Parents are moving to college with their kids

Do: Expect clear (and high) standards from your child’s teachers. How many parents out there have been miffed to see a woefully inadequate course description or syllabus from one of your kid’s teachers? Something which says “Homework will be included in your final grade”? Um, OK. Like … how? What percentage? What weight? Make the teacher explain what he/she means by a statement like that, and make sure it’s specific so your child (and you) know exactly what to expect. If an issue pops up later in the year you can point it out and say “But here’s what you said/wrote back on (insert date).”

In addition (and I may get into some trouble here with fellow teachers), question whether including (mis)behavior in a student’s grade is a wise practice. Academics and behavior should be kept separate. Over my years I had some students who excelled academically, but were real troublemakers. Should I have given them “B’s” instead of the high “A’s” they earned? Of course not. One thing I did for much of my career was to offer bonus points to students, usually obtained via test review activities or even during something like simple pre-lesson warm-ups. But contrariwise, I would also give “minus points” for things like constant talking, constant unpreparedness and the like. These minus points would never take away points from anything earned academically, they only affected any bonus points earned. And if a student didn’t have any bonus points, when they did get some they would first go towards erasing those minus points first.

Do: Keep tabs on your child’s performance via modern online grade reporting. Also, make sure the teachers are updating your child’s grades on the system. Just about every district across the country has some sort of online grade reporting system; as a result, there should be very little surprise by the time kids’ report cards come out. That is, if parents take a few moments every now and then to point and click!

Online grades were thought to be the panacea for academic progress communication by both parents and teachers. However, some (usually older) teachers have resisted such systems, and some parents claim they’re “too busy to check” grades regularly. In the former’s case, while it may take a bit of extra work to enter grades online, in the long run it saves time on emails and/or phone calls to parents for explanations of assignments and test scores. Regarding the latter, let’s be real — there’s virtually nothing easier than pointing and clicking on a website to get an instant glimpse of your child’s progress.

MORE: The perils of contemporary teaching: parents beat you up