A group of students at the University of Notre Dame is demanding that courses be reworked to reduce the number of reading materials penned by white, male scholars in an effort to “eliminate the violence of only privileging white scholarship.”

It’s one of several demands the “End Hate at ND” group has put forth recently. The group describes itself as “an initiative for organizing civil action against racist, xenophobic, sexist, trans-exclusionary, & queer-phobic structures at Notre Dame.”

The protesters’ demands also include diversity trainings in dorms, an end to a longstanding campus policy that forbids students from spending the night in the dorms of the opposite sex, and calls for the university to work with local Native American tribes.

As for the demand labeled “Decolonize Academia,” the student activists argue “cultural competence is key in building empathy for marginalized folks.” 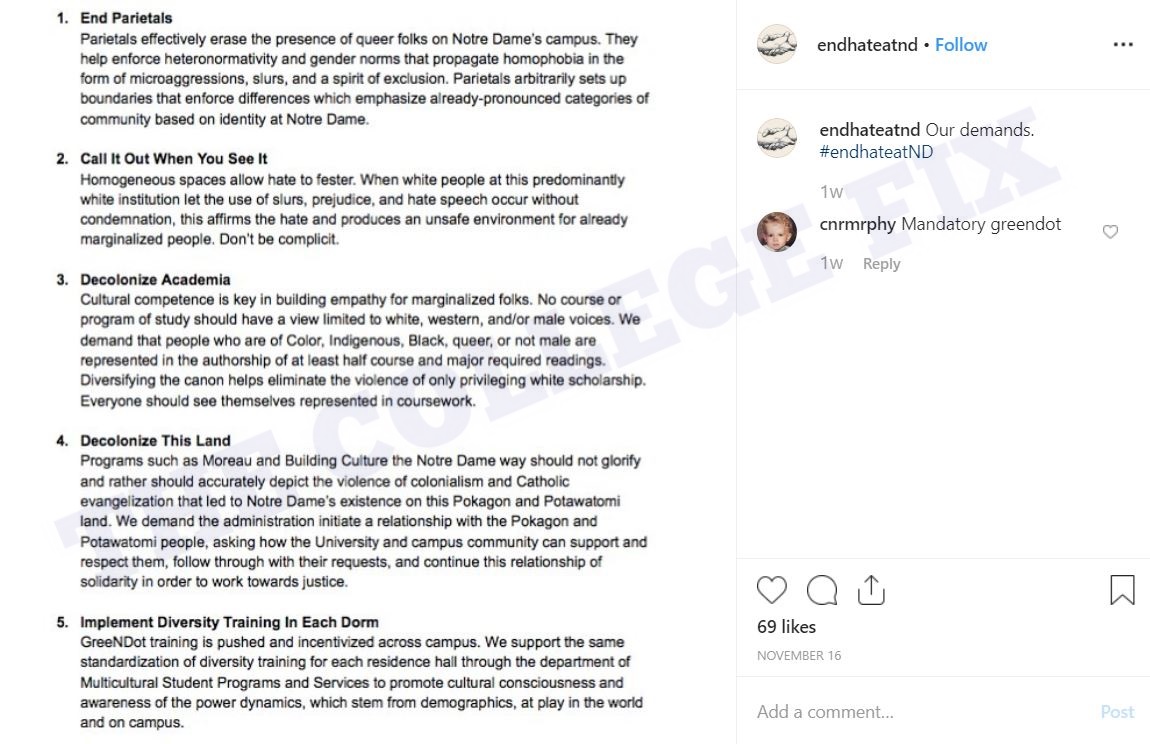 With that, “no course or program of study should have a view limited to white, western, and/or male voices. We demand that people who are of Color, Indigenous, Black, queer, or not male are represented in the authorship of at least half course and major required readings,” the demand states.

“Diversifying the canon helps eliminate the violence of only privileging white scholarship,” it adds.

Meanwhile, “End Hate at ND” also held two protests this past week to challenge a dorm policy they say they believe enforces a “white, cis-heteronormative hegemony.”

Students of the opposite sex are not permitted to enter the living areas of all-female or all-male residence halls after midnight on weekdays and 2:00 a.m. on weekends — a policy known as parietals.

But this policy puts LGBTQ students in danger, the student activists allege.

“Parietals effectively erase the presence of queer folks on Notre Dame’s campus. They help enforce heteronormativity and gender norms that propagate homophobia in the form of microaggressions, slurs, and a spirit of exclusion,” said junior David Philllips in a column in the Observer explaining the protesters’ reasoning.

Protesters staged a sit-in at an all-male residence hall on November 17 from 2:00 a.m. to approximately 5:00 a.m. to directly challenge the policy.

Ten students ignored multiple police orders to leave the residential hallway over a period of two hours, according to the Observer. The students complied when threatened with immediate expulsion. 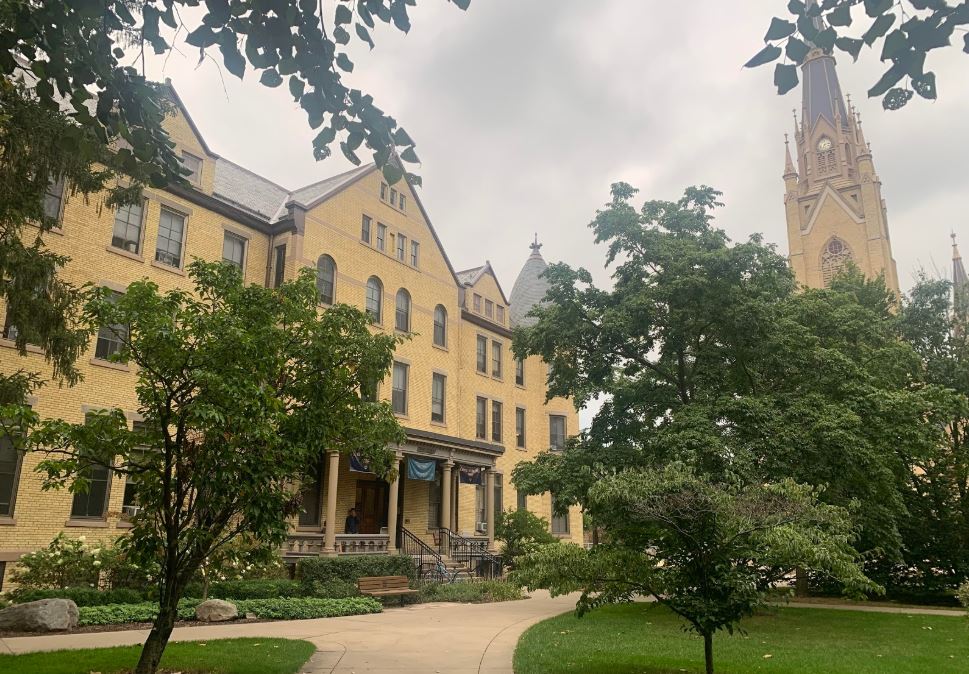 (Pictured: Sorin Hall, the location of the second protest, is the oldest dorm on campus and is situated adjacent to the Basilica of the Sacred Heart.)

The students staged a second protest November 21, but this time complied with university policies. Protesters stood in Sorin Hall’s 24 hour space — a space in every dorm open to students of both genders at all hours. The rector of the dorm, Father Bob Loughery, then welcomed the group into the all-male dormitory’s chapel and read from the Gospel of Luke.

Students gathered for the second protest at a sculpture depicting the Holy Family: Mary, Joseph, and Jesus. One protester stood on a bench adjacent to the sculpture and read from the Communist Manifesto.

Other students who do not agree with their peers’ demands to end parietals prayed the rosary 50 yards away for Notre Dame’s Catholic identity. 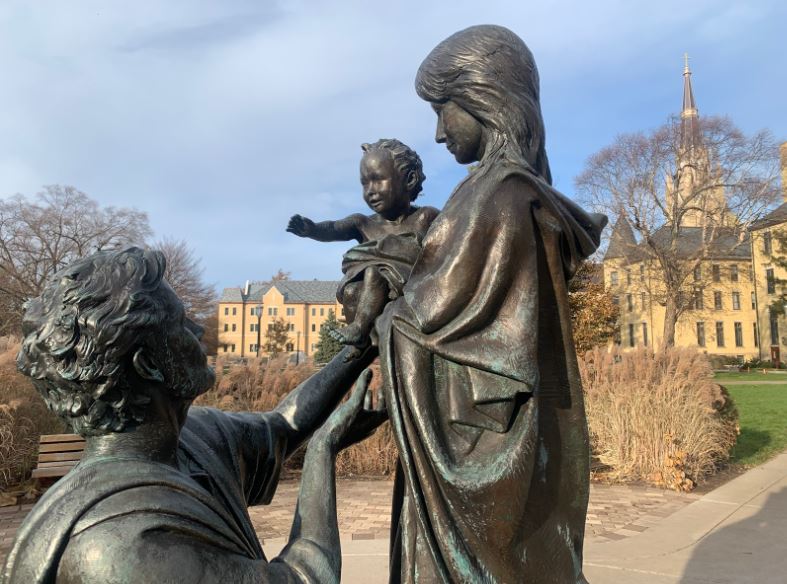 The change in tactics for “End Hate at ND” occurred after the protesters met with the administration in a closed-door meeting and decided to comply with university directives in order to avoid expulsion.

Previously, the group stated they would refuse to meet with administration except “in a public forum” because a closed-door meeting would “act as a muzzle on any activity or speech.”

The protesters say they are motivated by two incidents of “biased slurs” which allegedly occurred the day before and the day of the first protest.

University spokesman Dennis Brown confirmed to the Observer that both incidents of alleged biased slurs are under investigation by the Notre Dame Police Department.

The nature of the biased slurs is unknown, but a crime report filed by the Notre Dame Police Department includes a report of vandalism which occurred at the same residential hall and afternoon that the first incident allegedly occurred. 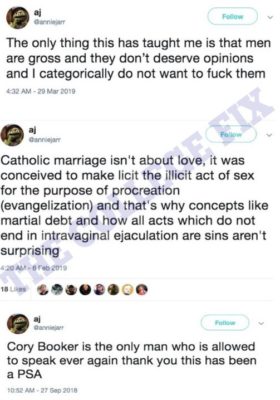 Three students who identified themselves as protesters in a column in the Observer are members of Notre Dame’s student government or judicial council. One of the leaders of the protest, Anne Jarrett, is director of gender relations in student government.

Jarrett sent an email to her department in student government in March stating one of her policy goals for the department was to end the policy of parietals.

Jarrett faced a controversial confirmation hearing in April for her student government position as a result of her comments: “men are gross and they don’t deserve opinions” and “Catholic marriage isn’t about love.”

And student body President Elizabeth Boyle has said the university’s dorms can promote “heteronormativity,” but she has not commented publicly on the student protests or parietals.

A graduate student who identifies as transgender and attended Notre Dame as an undergraduate wrote in to the Observer on Nov. 25 saying parietals “offered some of the most comforting environments for me.”