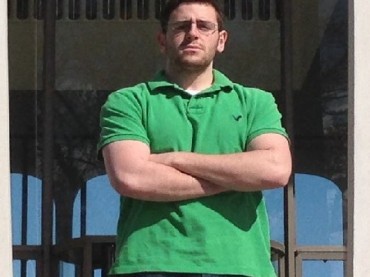 Fast forward a month later, and Fortgang is this morning the subject of a profile in the New York Times.

How did that happen?

Much credit belongs to my wise associate here at The Fix, Jennifer Kabbany, who spotted Fortgang’s essay in the backwaters of the internet and reached out to the young Princeton freshman.

We thought the essay was provocative and compelling. Fortgang enthusiastically agreed to let us republish it in its entirety. He even posed for a couple of photos on campus, so our readers could see just what this “white heterosexual male” looked like.

In the last few days, the essay has been read well over a million times on our website. And many other leading publications have linked to the article, including The Blaze, National Review, Real Clear Politics, just to name a few. Fortgang even made a television appearance on Fox News this week. Not bad for a college freshman.

His article has been shared by more than seventy thousand readers across social media platforms as of the time of this writing. Fortgang touched a nerve with the public. His challenge to the culture of white guilt on his Ivy League campus has sparked a national conversation on the issue of race, character and achievement.

His bottom line message–Hey, I’m proud of the achievements of my parents and grandparents and all the obstacles they overcame as Holocaust survivors, immigrants, hard working entrepreneurs, and devoted parents. It is their legacy of hard work, resilience, and devotion that enabled me to achieve what I’ve achieved so far. In other words, “privilege” is just another way to say “I come from a family with good character.”

That’s a controversial idea in this, the age of racial grievance and victimhood. While it isn’t correct to suggest that large social forces have no impact on someone’s odds for success, it would be equally wrong to suggest that white heterosexual males are born into success and never face any struggles of significance. Fortgang’s family history is proof of that idea.

The essay was inspired by a classmate who bitingly told Fortgang to “check” his privilege. The #CheckYourPrivilege slogan was originally promoted by American liberals as a way to stoke the fires of white guilt and racial grievance. If you’re doing well, in other words, and you’re white and not gay, you should feel bad about yourself. You should feel guilty.

Hold on! Fortgang seems to be saying. My family has suffered through a great deal of hardship. It is because of their courage, not any special “privilege” that I got where I am. Don’t look at the color of my family’s skin. Look at the content of our character.

Once the article took off, there was no stopping it.

The fact that so many others are reading his words and talking about this issue is something I am very proud of, as editor of The College Fix. It’s proof that we are having the impact that we set out to have each day as we publish these pages.

The article made a great impact, in part, because it was so well written, and also because it gave a voice to critical opinions shared by millions of Americans concerning the obsession over racial and sexual identity in U.S. politics today. Nevertheless, despite the article’s merits, the national conversation around Tal Fortgang’s article would not be taking place right now if it weren’t for The College Fix.

It is our mission to give a voice and a national platform to promising young conservative writers, who are so often marginalized and silenced on our nation’s liberal campuses.

Yesterday, while preparing to go on Fox News, Tal took a minute to write us a note here at The College Fix. “The amount of attention this has garnered has been incredible,” he wrote. “It wouldn’t have been possible without you, so I really want to thank you for helping spring this piece into the mainstream.”

We’re gratified that we can provide a voice conservative college students across the nation. We are seeing our student writers’ work attracting major attention more and more these days. It is, after all, what we’re here for–giving conservatives students a voice.

I speak for all of us here at The Fix when I say, Tal, you are most welcome.