How bad is the language commonly used to describe suicide? As bad as using slurs against other races or people with intellectual disabilities.

That was the argument made by Paul Granello, an Ohio State University expert on suicide prevention – and it got him investigated by the taxpayer-funded institution.

The Office of Institutional Equity is reviewing “this and other issues raised by this incident” involving the associate professor of counseling education, spokesman Ben Johnson told The Columbus Dispatch. 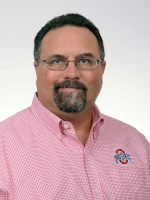 Instead of teaching this semester as he was scheduled to do, Granello (left) is “developing curriculum, conducting research and handling other responsibilities” related to his faculty position, Johnson said.

The spokesperson didn’t say whether OSU forced him out of the classroom, as Emory University did in response to a law professor referring to the n-word in the educational context. It also investigated a Native American instructor for using the n-word to compare slurs used against blacks and Native Americans.

Some of Granello’s graduate students were so offended by his comparison – and the fact that the professor actually said “nigger” – that they wrote a letter to him last fall, but it’s hard to see how their concerns supersede the professor’s academic freedom.

Granello had said the phrase “committed suicide” is now verboten and comparable to the n-word, but the students “don’t believe that this is an equal comparison, given the historical context and the power dynamics inherent in who can use what terms and when,” they wrote:

“Many of us were especially uncomfortable hearing you use the n-word and did not believe it was necessary to make your point, as we were already engaged,” the students wrote. They noted that none of the present students were black, and they questioned whether Granello would have made that statement if they had been.

Unconnected to racial issues, the students wrote they were offended by Granello’s claim that “memorials and ceremonies” on campus in the wake of a suicide can actually make suicide more attractive to those at risk. “[I]t’s important that you are aware that there were other survivors in the room who were deeply hurt by this comment,” they wrote.

Granello later apologized to students in a private letter for his use of the n-word, which he called “inappropriate to use” in any context.

He backtracked a little in an interview with the Dispatch, which obtained both letters, emphasizing the context of a “graduate-level course with 12 students in a discussion of the power of language and the care that we must use in our choice of words”:

“I never used the word in a pejorative context, I was teaching about the power of language. I became aware later that some students were offended by the words used even in that context.”