A workshop held at Ohio State University on Tuesday taught white student attendees about their “privilege,” how to not act racist, and that it’s impossible for white people to be victims of racism and only white people can be racist.

The event, titled “Interrupting Racism: Tips & Tools for White People,” was one of the many programs the public university’s multicultural center will host as part of its “Ally Week of Action,” currently underway.

The center’s workshop aimed to teach white students how to “develop a personal plan of action to interrupt racism,” according to the university’s website. It added that all were welcome to the “Interrupting Racism” workshop, however its content had a “focus on skill building amongst white identified people.”

Approximately 20 students attended the workshop; 19 were white and one African American. A student reporter for The College Fix attended as well to better understand what it strived to impart.

During the workshop, students were taught there are three “ingredients” of racism: race, power and prejudice. According to Angie Wellman, associate director in the Student Life Multicultural Center who led the event, every race that is not white lacks the power aspect, which is why white people cannot be victims of racism.

The African American attendee also asked Wellman point-blank if white people were the only people who could be racist. Wellman said yes.

Ben Johnson, a spokesman for Ohio State, declined to answer The College Fix’s question of whether the workshop would impact the university in a positive way, or if white students and faculty at Ohio State have some sort of problem with standing up to racism.

At the beginning of the workshop, students were asked to introduce themselves, followed by their preferred gender pronouns. They were then asked to state a fact about themselves that people would not know “just by looking at us.”

Participants were also asked to share when their first exposure to race, racism, white supremacy and white privilege was. When asked how they felt about discussing race and racism in America, many attendees said they felt hesitant and cautious. One attendee even said she felt guilty.

As the workshop went on, students were asked to delve deeper into the topic of racism and the definitions surrounding racism, including reverse racism, prejudice, power and oppression.

Students were also asked to give examples of white culture. Attendees cited several things they believe are associated with white culture, including dolls with white skin, being punctual, their vernacular, and supporting concepts such as agreeing to disagree.

Attendees were also given a worksheet listing 26 different examples of “white privilege.” The list included examples such as:

I can turn on the television or open to the front page of the paper and see people of my race widely represented.

Whether I use checks, credit cards or cash, I can count on my skin color not to work against the appearance of financial reliability.

I can choose blemish cover or bandages in “flesh” color and have them more less match my skin.

The workshop was largely self-reflective in nature. It was centered around how 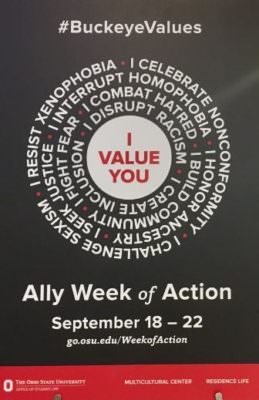 white people have contributed to white supremacy both overtly and covertly and what they can do, as white people, to mitigate this problem.

During Ohio State’s “Ally Week of Action,” students are also encouraged to stop by the Multicultural Center to sign the Week of Action Pledge.

If students post their statement to social media with the hashtag #BuckeyeValues, they receive a free t-shirt that has slogans including but not limited to “I resist xenophobia, I celebrate nonconformity, I challenge sexism” and “I interrupt homophobia.”

So far, student pledges include to “always stand up for the oppressed and use my privilege to make change” and “to shut up and listen when people of color tell me how my actions affect them.”